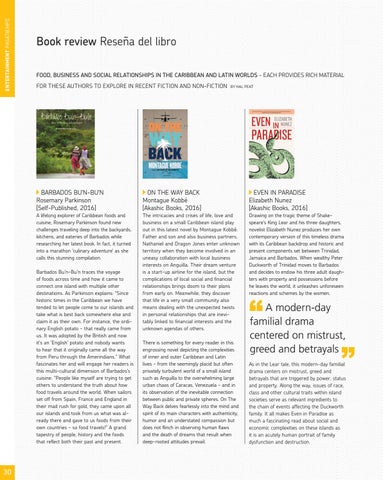 Book review Reseña del libro FOOD, BUSINESS AND SOCIAL RELATIONSHIPS IN THE CARIBBEAN AND LATIN WORLDS - EACH PROVIDES RICH MATERIAL FOR THESE AUTHORS TO EXPLORE IN RECENT FICTION AND NON-FICTION

ON THE WAY BACK Montague Kobbé [Akashic Books, 2016]

A lifelong explorer of Caribbean foods and cuisine, Rosemary Parkinson found new challenges traveling deep into the backyards, kitchens, and eateries of Barbados while researching her latest book. In fact, it turned into a marathon &#39;culinary adventure&#39; as she calls this stunning compilation.

The intricacies and crises of life, love and business on a small Caribbean island play out in this latest novel by Montague Kobbé. Father and son and also business partners, Nathaniel and Dragon Jones enter unknown territory when they become involved in an uneasy collaboration with local business interests on Anguilla. Their dream venture is a start-up airline for the island, but the complications of local social and financial relationships brings doom to their plans from early on. Meanwhile, they discover that life in a very small community also means dealing with the unexpected twists in personal relationships that are inevitably linked to financial interests and the unknown agendas of others.

Drawing on the tragic theme of Shakespeare&#39;s King Lear and his three daughters, novelist Elizabeth Nunez produces her own contemporary version of this timeless drama with its Caribbean backdrop and historic and present components set between Trinidad, Jamaica and Barbados. When wealthy Peter Duckworth of Trinidad moves to Barbados and decides to endow his three adult daughters with property and possessions before he leaves the world, it unleashes unforeseen reactions and schemes by the women.

Barbados Bu&#39;n-Bu&#39;n traces the voyage of foods across time and how it came to connect one island with multiple other destinations. As Parkinson explains: &quot;Since historic times in the Caribbean we have tended to let people come to our islands and take what is best back somewhere else and claim it as their own. For instance, the ordinary English potato - that really came from us. It was adopted by the British and now it&#39;s an &#39;English&#39; potato and nobody wants to hear that it originally came all the way from Peru through the Amerindians.&quot; What fascinates her and will engage her readers is this multi-cultural dimension of Barbados&#39;s cuisine: &quot;People like myself are trying to get others to understand the truth about how food travels around the world. When sailors set off from Spain, France and England in their mad rush for gold, they came upon all our islands and took from us what was already there and gave to us foods from their own countries - so food travels!&quot; A grand tapestry of people, history and the foods that reflect both their past and present.

There is something for every reader in this engrossing novel depicting the complexities of inner and outer Caribbean and Latin lives - from the seemingly placid but often privately turbulent world of a small island such as Anguilla to the overwhelming large urban chaos of Caracas, Venezuela - and in its observation of the inevitable connection between public and private spheres. On The Way Back delves fearlessly into the mind and spirit of its main characters with authenticity, humor and an understated compassion but does not flinch in observing human flaws and the death of dreams that result when deep-rooted attitudes prevail.

A modern-day familial drama centered on mistrust, greed and betrayals As in the Lear tale, this modern-day familial drama centers on mistrust, greed and betrayals that are triggered by power, status and property. Along the way, issues of race, class and other cultural traits within island societies serve as relevant ingredients to the chain of events affecting the Duckworth family. It all makes Even in Paradise as much a fascinating read about social and economic complexities on these islands as it is an acutely human portrait of family dysfunction and destruction. 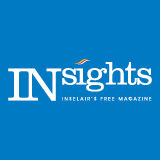