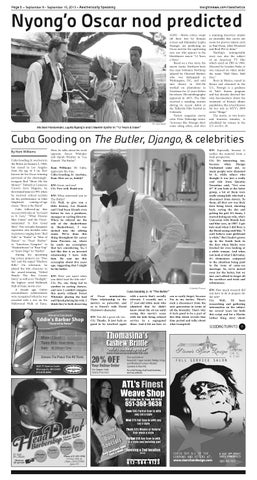 (GIN) – Movie critics, swept off their feet by Kenyan actress and filmmaker Lupita Nyong’o, are predicting an Oscar nod for the captivating new star who appears in the blockbuster movie “12 Years a Slave.” Based on a true story, the movie tracks Northern-born free man Solomon Northrup (played by Chiwetel Ejiofor) who was kidnapped in Washington, DC, and sold into slavery in 1841.He worked on plantations in Louisiana for 12 years before his release. His autobiography appeared in 1853. The film received a standing ovation during its recent debut at the Tulleride Film Festival in Colorado. Variety magazine movie critic Peter Debrudge wrote: “Actresses like Nyong’o don’t come along often, and she’s

a stunning discovery amidst an ensemble that carves out room for proven talents such as Paul Dano, Alfre Woodard and Brad Pitt to shine.” Northup’s unforgettable story was also the subject of an American TV film which aired on PBS in 1984. Directed by Gordon Parks, it was released on video under the name “Half Slave, Half Free.” Born in Mexico, raised in Kenya and educated in the U.S., Nyong’o is a graduate of Yale’s drama program and has already directed her own documentary about the treatment of Kenya’s albino population. She is best known for her role in MTV’s 2009 series “Shuga.” The movie, at two hours and fourteen minutes, is scheduled for release in the U.S. on Oct. 18.

Cuba Gooding on The Butler, Django, & celebrities By Kam Williams Cuba Gooding, Jr. was born in the Bronx on January 2, 1968, but raised in Los Angeles from the age of 4 on. Best known for his Oscar-winning portrayal of the charminglyarrogant Rod “Show Me the Money!” Tidwell in Cameron Crowe’s Jerry Maguire, he first found fame in 1991 when he received critical acclaim for his performance in John Singleton’s coming-of-age classic “Boyz n the Hood.” Cuba followed-up that success with roles in “As Good as It Gets,” “What Dreams May Come,” and the Oscarnominated “A Few Good Men.” The versatile thespian’s repertoire also includes roles in pictures ranging from “Red Tails” to “Radio” to “Men of Honor” to “Pearl Harbor” to “American Gangster” to “Shadowboxer” to “Boat Trip” to “Snow Dogs” to “Norbit.” Among his upcoming big screen projects are “Don Jon” and the sequel “Machete Kills.” On television, he played the title character in the award-winning “Gifted Hands: The Ben Carson Story,” as well as in “Firelight,” the highest rated Hallmark Hall of Fame movie ever. A decade ago, Cuba’s extraordinary achievements were recognized when he was awarded with a star on the Hollywood Walk of Fame.

Here, he talks about his work opposite Forest Whitaker and Oprah Winfrey in “Lee Daniels’ The Butler.”

KW: Especially because it tackles the material from a fresh perspective. CG: It’s interesting, too, because when Django Unchained came out, so many people were alienated by it, while others who thought it was just a really cool ride from Quentin Tarantino said, “Get over it!” If you look at the latter group, a lot of them were really young kids who had a disconnect from slavery. To them, all they saw was their hero being freed, shooting back, saving the day and getting his girl. It’s funny, I started dating my wife, who’s Caucasian with blonde hair and blue eyes, in 1987. I got hate mail when I did Boyz n the Hood saying stuff like, “I can’t believe your girlfriend is white.” But I hadn’t grown up in the South back in the days when blacks were lynched for even looking at a white woman. And when you look at what I did today, it’s elementary compared to the attention being paid to the issue of same-sex marriage. So, we’ve moved away for the better, but we just can’t afford to forget all the sacrifices and trials and tribulations.

Kam Williams: Hi Cuba, appreciate the time. Cuba Gooding, Jr: Anytime, Kam. How are ya, buddy? KW: Great, and you? CG: Very well, thank you. KW: What interested you in The Butler? CG: Well, to give you a little history, Lee Daniels and I had been friends even before he was a producer, manager or casting director. When he offered me the role of the shadowboxer in Shadowboxer, I was invited into the editing room. We’ve done this thing throughout his career from Precious on, where he sends me screenplays that he’s considering. So, I feel like this is an invested relationship I have with him. He sent me this screenplay about five years ago, suggesting that I might be the butler. KW: Were you upset when you didn’t land the title role? CG: No, one thing led to another in casting choices, and now I couldn’t imagine this movie without Forest Whitaker playing the lead and Oprah playing his wife. I think they’re both deserving

Cuba Gooding Jr. in “The Butler” of Oscar nominations. Their relationship in the movie’s so powerful, and so is Forest’s with David Oyelowo’s character. KW: You did a great job, too. CG: Thanks. It just feels so good to be involved again

with a movie that’s socially relevant. I recently met a 27 year-old white male who admitted that he didn’t know about the sit-ins until seeing this movie’s scene with the kids being refused service in a segregated diner. And it hit me how we

can so easily forget, because I’m in my forties. There’s such a disconnect from the next generation in terms of all the brutality. That’s why it feels good to be a part of this film which revisits that time period and talks about what transpired.

KW: How much research did you have to do to prepare for the role? CG: Well, I’d been researching and gathering information on the subject for several years for both this script and for a Martin Luther King story about

News for the week of September 9, 2013. Insight News is the community journal for news, business and the arts serving the Minneapolis / St....

News for the week of September 9, 2013. Insight News is the community journal for news, business and the arts serving the Minneapolis / St....