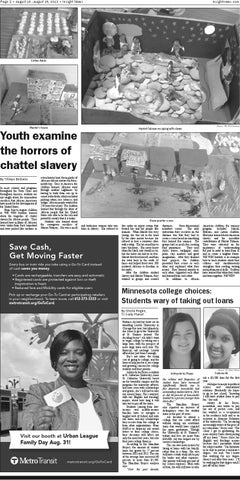 Youth examine the horrors of chattel slavery By Titilayo Bediako In most schools and programs throughout the Twin Cities and throughout America, students are not taught about the tremendous sacrifices that African Americans have made for the development of the United States. From June to August, children at WE WIN Institute learned about the tragedies of chattel slavery for African people. They learned how millions of Africans were stolen from their homeland and were packed like sardines in

a treacherous boat; the majority of Africans did not survive the threemonth trip. Once in America, the children learned, Africans went through another nightmare by having to work from sun up to sunset in the fields, which included picking cotton, rice, tobacco, and indigo. African people worked for 250 years for no pay. The children learned that through the labor of African people that the United States was able to be the rich and powerful country that it is today. Students also learned about the courageous sacrifices of Harriet Tubman. She was a small

Slave quarter scene and bodacious woman who was born in slavery. She refused to

live under an unjust system that treated her and her people like animals. When Harriet was very young, she was hit in the head by the slave master because she refused to beat a runaway slave with a whip. The hit caused her to have blackouts. She never knew when the black outs would occur, but she knew she had to be free. Harriet first freed herself, and then she went back to the south 19 times and helped freed over 300 enslaved Africans to freedom in the north. After the children studied slavery and Harriet Tubman, they worked in groups and created

dioramas, three-dimensional miniature scenes. The only instruction they received on the diorama was that they had to create a scene based on something they learned this summer. The groups had so much fun creating their panoramas. They used sticks, leaves, wallpaper, sand, paint, clay, markers and great imagination. After they finished their projects, the children presented their scenes to each other and explained what they meant. They listened intently to each other, supported each other and learned from each other. In addition to African

American children, the summer program included Somali, Eritrean, and Latino children. Everyone learned about American slavery and the incredible contributions of Harriet Tubman. They were educated on the importance of understanding the past in order to learn from it, and to create a brighter future. WE WIN Institute is an example how to teach students about their cultures and simultaneously strengthen their reading, writing and mathematical skills. Children have learned that when they work and learn together; WE WIN!

Visit our booth at Urban League

Fadumo Ali had her heart set on attending Loyola University in Chicago this year, but ultimately, she chose to go to the University of St. Thomas instead. The deciding factor? Ali didnâ&#x20AC;&#x2122;t want to begin college by taking out a large loan, with the prospect of more large loans each year. The financial aid package Loyola offered her just wasnâ&#x20AC;&#x2122;t enough. Sheâ&#x20AC;&#x2122;s not alone: the rising cost of going to college, and the loans to help pay for it, are a large and growing concern for college students and their parents. Ashley de los Reyes, a student at St. Catherine University, chose St. Catherine University based on the beautiful campus and the programs the university offered, and now, even with scholarships and grants, sheâ&#x20AC;&#x2122;s still had to take out several loans. Sheâ&#x20AC;&#x2122;s worried, with her English and theology majors, about how long it will take her to pay off the loans. Students coming from lowincome and middle-income families have to navigate a tangled web of federal and state aid, loans, and any scholarships they receive from the college or from other organizations. From FAFSA to financial aid award letters to final college choice, their decisions will affect not only the next four years, but also their post-college finances. According to the Hamilton Project, the amount of student loans has grown by 77 percent between 2002 and 2012. The size of the average loan increased 60 percent, to more than $5,500. The Hamilton Project analysis says: â&#x20AC;&#x153;Over the past decade,

Ashley de los Reyes the volume and frequency of student loans have increased significantly. Nearly one in five American households had outstanding student debt in 2010, as did 40 percent of households headed by a person younger than thirty-five.â&#x20AC;? The Hamilton Project also reported an increase of delinquency rates for student loans in the past 10 years. Ali decided to attend a college that she could afford without taking out exorbitant loans that would have crippled her upon graduation. Though the University of St. Thomasâ&#x20AC;&#x2122;s tuition and fees are more than $30,000, Ali was helped out by several scholarships. She can save more money by living at home with her family, rather than in a dorm. She also will have a work study job to pay for books and other expenses. Her parents will help pay part of her school expenses. Even with all that, she will still have to take

News for the week of August 19, 2013. Insight News is the community journal for news, business and the arts serving the Minneapolis / St. Pa...

News for the week of August 19, 2013. Insight News is the community journal for news, business and the arts serving the Minneapolis / St. Pa...