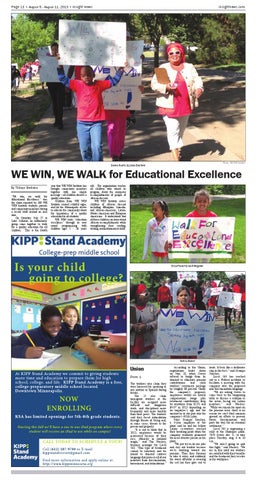 year that WE WIN Institute has brought community members together with one simple message – all children deserve a quality education. Children from WE WIN Institute created colorful signs, and hit the Minneapolis streets to educate the community about the importance of a quality education for all students. WE WIN touts “education excellence” through its year round programming with children ages 5 - 18 years

old. The organization teaches all children who attend its program about the enormous accomplishments of people of African descent. WE WIN Institute serves children of African descent including Ethiopian, Somalia, and African-American, Latino, Native-American and European Americans. It understands that all these children can learn about African accomplishments while strengthening their reading, writing, and mathematical skills.

Union From 1 The workers also claim they were harassed for speaking to one another in Spanish during breaks. The 15 also claim immigrant workers at the facility are assigned more difficult and dangerous work, and disciplined more frequently and more harshly than their peers. The workers said they faced intimidation through threats of firing and, in some cases, threats to the person and property. “It is sad to think that in 2013, employees would be mistreated because of their race, ethnicity or national origin,” said Tim Mackey, business manager for Local 563. “This type of treatment cannot be tolerated, and we intend to demand contract language that protects all of our members from discrimination, harassment, and intimidation.”

According to the Union, negotiations broke down on June 18, when Cretex refused to budge from its demand to eliminate pension contributions and slash workers’ retirement package by roughly 80 percent. Under the company’s proposal, employees would see hourly compensation (wage plus retirement contribution) drop by anywhere from $2.91 and $4.07 in 2013 depending on an employee’s age and the amount he or she puts into the company’s 401(k) plan. Julio Ocampo Sanchez, a 3-year employee at the plant said he and his fellow Latino co-workers reached their breaking point when the company evidently promoted the most abusive person in the plant. “We just try to do our jobs and stay out trouble because we’re working toward our pension. Then they threaten to take it away, and suddenly the worst offender is wearing the red hat they give out to

leads. It feels like a deliberate slap in the face,” said Ocampo Sanchez. Local 563 has reached out to a Federal mediator to facilitate a meeting with the company over the proposed anti-discrimination language. “We are asking Cretex to come back to the bargaining table to discuss a solution to the issues facing our Latino members,” said Mackey. “While we remain far apart on the pension issue, there is no reason we can’t find common ground on efforts to prevent future discrimination and pave the way for an eventual settlement.” Local 563 is organizing a rally at the Shakopee plant, 7070 Cretex Ave. S., to take place Tuesday, Aug. 6 at 10 a.m. “We aren’t going to quit this fight,” said Mackey. “We are in this until our workers are satisfied with their benefits and the treatment they receive in the workplace.”

News for the week of August 5, 2013. Insight News is the community journal for news, business and the arts serving the Minneapolis / St. Pau...

News for the week of August 5, 2013. Insight News is the community journal for news, business and the arts serving the Minneapolis / St. Pau...