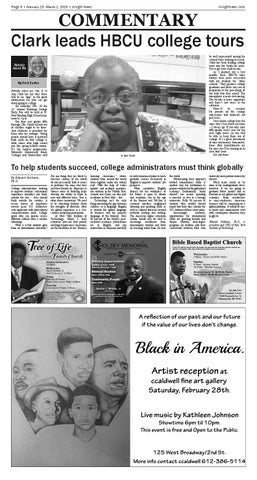 By Fred Easter Nobody asked me, but, if Jo Ann Clark has her way; there will be no “gap” in the great information our kids can get about going to college. On Saturday, Feb. 28 the 11th Annual Thinking College Early Fair will be held at St. Paul Harding High School from noon to 3 p.m. The flyer says grades fifth through 12th. I think all kids out of strollers ought to be there. And childcare is provided for those who are younger. Young people should have it modeled from early on that college is what comes after high school just like spring follows winter. It’s the normal progression. Naturally, Historically Black Colleges and Universities will

be well represented among the schools there looking to recruit. Clark has been leading college tours into the South for years. Try to get your child on one. As I pointed out a few months back, HBCUs have always been more successful with our students the “other schools.” They produce college graduates and PhDs way out of proportion to the percentage of our kids that they enroll. The atmosphere is more welcoming. The faculty is more supportive and there’s hot sauce in the cafeteria. There’ll be sessions for parents on the college admissions and financial aid processes. I feel about college fairs the same way I feel about elections – I always go. If you take your fifth grader every year for the next eight years, no one will be able to keep them out of college. It’s a great investment of time and money. Remember, those little knuckleheads are the ones you’ll be leaning on in your later years. See you there.

To help students succeed, college administrators must think globally By Edward Guiliano, Ph.D. College administrators looking to improve students’ educational experience shouldn’t just think outside the box -- they should think outside the country. A recent survey of employers reveals most U.S. businesses seek applicants with intercultural communications skills. College grads who can operate across different cultures have a serious advantage. What is it that students gain from an international education?

For one thing, they are likely to discover citizens of the world do not necessarily look at issues or problems the same way they and their friends do. Exposure to diverse ways of thinking helps develop the ability to think in new and different ways. This is what drives innovation. We need to be educating students about the strengths of diversity. After all, global experience is a 21stcentury leadership prerequisite. At New York Institute of Technology, which I lead, relatively low-cost web portals and large telepresence classrooms are the backbone of our “distance

learning classrooms,” where students from around the world learn together under one virtual roof. With the help of video uplinks and multiple monitors, our students in the Middle East, Canada and China can take part in debates in New York -- live. Technology isn’t the only thing narrowing the gap between cultures; so is language. English is already the global language of business and the primary language of the Internet. Over 80 percent of the world’s peerreviewed academic publications are in English, and top universities in Germany and Italy

recently announced plans to teach graduate courses exclusively in English to improve students’ job prospects. What constitutes English fluency for the workplace of the future is open to debate and evolution, but in the age of the Internet and WeChat, it certainly involves heightened listening and speaking skills as well as cultural literacies beyond textbook reading and writing. The American higher education system would also do well to encourage enrollment from international students and draw on teaching talent from all over

the world. Modernizing their approach toward international study is another way for institutions to prepare students for the globalized economy. Traditionally, “study abroad” has meant spending a semester or two at a foreign university. Fully 96 percent of students who studied abroad report that their time outside the U.S. influenced their career plans. Increasingly, however, opportunities for international study are growing broader and deeper. Notably, dual-degree programs let students split their coursework between their own

university and a partner university abroad. Much more needs to be done at the undergraduate level, however, if we are going to graduate future leaders able to function in our global and digital economy. From architecture to semi-conductors, American business will be competing on a global platform. It would be nice to know and communicate well with counterparts wherever they might be. Edward Guiliano, Ph.D., is president and CEO of New York Institute of Technology.

News for the week of February 23, 2015. Insight News is the community journal for news, business and the arts serving the Minneapolis / St....

News for the week of February 23, 2015. Insight News is the community journal for news, business and the arts serving the Minneapolis / St....