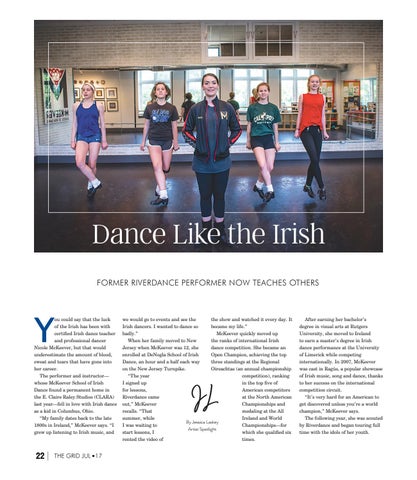 Dance Like the Irish FORMER RIVERDANCE PERFORMER NOW TEACHES OTHERS

ou could say that the luck of the Irish has been with certified Irish dance teacher and professional dancer Nicole McKeever, but that would underestimate the amount of blood, sweat and tears that have gone into her career. The performer and instructor— whose McKeever School of Irish Dance found a permanent home in the E. Claire Raley Studios (CLARA) last year—fell in love with Irish dance as a kid in Columbus, Ohio. “My family dates back to the late 1800s in Ireland,” McKeever says. “I grew up listening to Irish music, and

the show and watched it every day. It we would go to events and see the became my life.” Irish dancers. I wanted to dance so McKeever quickly moved up badly.” the ranks of international Irish When her family moved to New dance competition. She became an Jersey when McKeever was 12, she Open Champion, achieving the top enrolled at DeNogla School of Irish three standings at the Regional Dance, an hour and a half each way Oireachtas (an annual championship on the New Jersey Turnpike. competition), ranking “The year in the top five of I signed up American competitors for lessons, at the North American Riverdance came Championships and out,” McKeever medaling at the All recalls. “That Ireland and World summer, while By Jessica Laskey Championships—for I was waiting to Artist Spotlight which she qualified six start lessons, I times. rented the video of

After earning her bachelor’s degree in visual arts at Rutgers University, she moved to Ireland to earn a master’s degree in Irish dance performance at the University of Limerick while competing internationally. In 2007, McKeever was cast in Ragús, a popular showcase of Irish music, song and dance, thanks to her success on the international competition circuit. “It’s very hard for an American to get discovered unless you’re a world champion,” McKeever says. The following year, she was scouted by Riverdance and began touring full time with the idols of her youth.