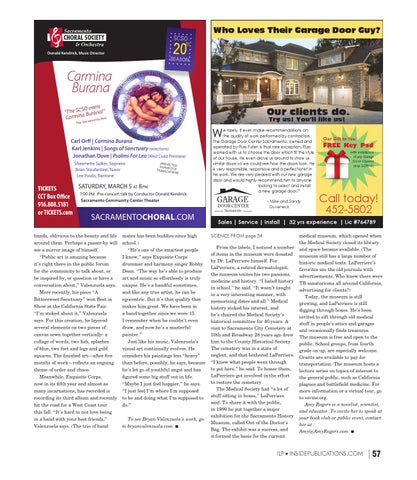 Who Loves Their Garage Door Guy?

Carmina Burana s SO own “The SC a Burana!” e Carmin ento Be T

hands, oblivious to the beauty and life around them. Perhaps a passer-by will see a mirror image of himself. “Public art is amazing because it’s right there in the public forum for the community to talk about, or be inspired by, or question or have a conversation about,” Valenzuela says. More recently, his piece “A Bittersweet Sanctuary” won Best in Show at the California State Fair. “I’m stoked about it,” Valenzuela says. For this creation, he layered several elements on two pieces of canvas sewn together vertically: a collage of words, two fish, splashes of blue, two feet and legs and gold squares. The finished art—after five months of work—reflects an ongoing theme of order and chaos. Meanwhile, Exquisite Corps, now in its fifth year and almost as many incarnations, has recorded is recording its third album and recently hit the road for a West Coast tour this fall. “It’s hard to not love being in a band with your best friends,” Valenzuela says. (The trio of band

mates has been buddies since high school.) “He’s one of the smartest people I know,” says Exquisite Corps drummer and harmony singer Robby Dean. “The way he’s able to produce art and music so effortlessly is truly unique. He’s a handful sometimes, and like any true artist, he can be egocentric. But it’s that quality that makes him great. We have been in a band together since we were 15. I remember when he couldn’t even draw, and now he’s a masterful painter.” Just like his music, Valenzuela’s visual art continually evolves. He considers his paintings less “heavy” than before, possibly, he says, because he’s let go of youthful angst and has figured some big stuff out in life. “Maybe I just feel happier,” he says. “I just feel I’m where I’m supposed to be and doing what I’m supposed to do.” To see Bryan Valenzuela’s work, go to bryanvalenzuela.com n

e rarely, if ever, make recommendations on the quality of work performed by contractors. The Garage Door Center Sacramento, owned and operated by Russ Fuller, is that rare exception. Russ worked with us to choose the door which Àt the style of our house. He even drove us around to show us similar doors so we could see how the doors look. He is very responsible, responsive and a perfectionist in his work. We are very pleased with our new garage door and would highly recommend him to anyone looking to select and install a new garage door.”

Our Gift to You:

Sales | Service | Install | 32 yrs experience | Lic #764789 SCIENCE FROM page 54 From the labels, I noticed a number of items in the museum were donated by Dr. LaPerriere himself. For LaPerriere, a retired dermatologist, the museum unites his two passions, medicine and history. “I hated history in school,” he said. “It wasn’t taught in a very interesting manner, with memorizing dates and all.” Medical history stoked his interest, and he’s chaired the Medical Society’s historical committee for 40 years. A visit to Sacramento City Cemetery at 10th and Broadway 28 years ago drew him to the County Historical Society. The cemetery was in a state of neglect, and that bothered LaPerriere. “I knew what people went through to get here,” he said. To honor them, LaPerriere got involved in the effort to restore the cemetery. The Medical Society had “a lot of stuff sitting in boxes,” LaPerriere said. To share it with the public, in 1990 he put together a major exhibition for the Sacramento History Museum, called Out of the Doctor’s Bag. The exhibit was a success, and it formed the basis for the current

medical museum, which opened when the Medical Society closed its library and space became available. (The museum still has a large number of historic medical texts. LaPerriere’s favorites are the old journals with advertisements. Who knew there were TB sanatoriums all around California, advertising for clients?) Today, the museum is still growing, and LaPerriere is still digging through boxes. He’s been invited to sift through old medical stuff in people’s attics and garages and occasionally finds treasures. The museum is free and open to the public. School groups, from fourth grade on up, are especially welcome. Grants are available to pay for transportation. The museum hosts a lecture series on topics of interest to the general public, such as California plagues and battlefield medicine. For more information or a virtual tour, go to ssvms.org. Amy Rogers is a novelist, scientist, and educator. To invite her to speak at your book club or public event, contact her at : Amy@AmyRogers.com n