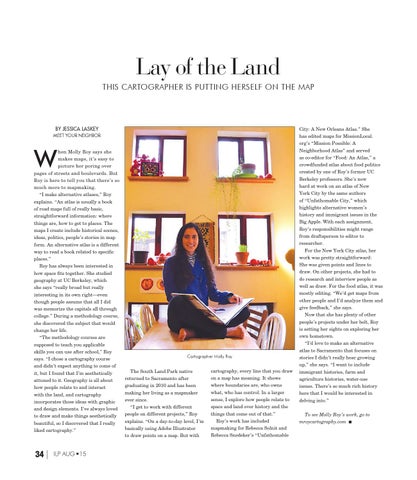 BY JESSICA LASKEY MEET YOUR NEIGHBOR

hen Molly Roy says she makes maps, it’s easy to picture her poring over pages of streets and boulevards. But Roy is here to tell you that there’s so much more to mapmaking. “I make alternative atlases,” Roy explains. “An atlas is usually a book of road maps full of really basic, straightforward information: where things are, how to get to places. The maps I create include historical scenes, ideas, politics, people’s stories in map form. An alternative atlas is a different way to read a book related to specific places.” Roy has always been interested in how space fits together. She studied geography at UC Berkeley, which she says “really broad but really interesting in its own right—even though people assume that all I did was memorize the capitals all through college.” During a methodology course, she discovered the subject that would change her life. “The methodology courses are supposed to teach you applicable skills you can use after school,” Roy says. “I chose a cartography course and didn’t expect anything to come of it, but I found that I’m aesthetically attuned to it. Geography is all about how people relate to and interact with the land, and cartography incorporates those ideas with graphic and design elements. I’ve always loved to draw and make things aesthetically beautiful, so I discovered that I really liked cartography.”

The South Land Park native returned to Sacramento after graduating in 2010 and has been making her living as a mapmaker ever since. “I get to work with different people on different projects,” Roy explains. “On a day-to-day level, I’m basically using Adobe Illustrator to draw points on a map. But with

cartography, every line that you draw on a map has meaning. It shows where boundaries are, who owns what, who has control. In a larger sense, I explore how people relate to space and land over history and the things that come out of that.” Roy’s work has included mapmaking for Rebecca Solnit and Rebecca Snedeker’s “Unfathomable

City: A New Orleans Atlas.” She has edited maps for MissionLocal. org’s “Mission Possible: A Neighborhood Atlas” and served as co-editor for “Food: An Atlas,” a crowdfunded atlas about food politics created by one of Roy’s former UC Berkeley professors. She’s now hard at work on an atlas of New York City by the same authors of “Unfathomable City,” which highlights alternative women’s history and immigrant issues in the Big Apple. With each assignment, Roy’s responsibilities might range from draftsperson to editor to researcher. For the New York City atlas, her work was pretty straightforward: She was given points and lines to draw. On other projects, she had to do research and interview people as well as draw. For the food atlas, it was mostly editing. “We’d get maps from other people and I’d analyze them and give feedback,” she says. Now that she has plenty of other people’s projects under her belt, Roy is setting her sights on exploring her own hometown. “I’d love to make an alternative atlas to Sacramento that focuses on stories I didn’t really hear growing up,” she says. “I want to include immigrant histories, farm and agriculture histories, water-use issues. There’s so much rich history here that I would be interested in delving into.” To see Molly Roy’s work, go to mroycartography.com n