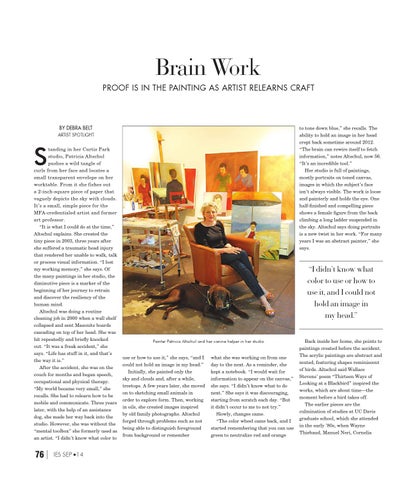 Brain Work PROOF IS IN THE PAINTING AS ARTIST RELEARNS CRAFT

to tone down blue,” she recalls. The ability to hold an image in her head crept back sometime around 2012. “The brain can rewire itself to fetch information,” notes Altschul, now 56. “It’s an incredible tool.” Her studio is full of paintings, mostly portraits on toned canvas, images in which the subject’s face isn’t always visible. The work is loose and painterly and holds the eye. One half-finished and compelling piece shows a female figure from the back climbing a long ladder suspended in the sky. Altschul says doing portraits is a new twist in her work. “For many years I was an abstract painter,” she says.

tanding in her Curtis Park studio, Patricia Altschul pushes a wild tangle of curls from her face and locates a small transparent envelope on her worktable. From it she fishes out a 2-inch-square piece of paper that vaguely depicts the sky with clouds. It’s a small, simple piece for the MFA-credentialed artist and former art professor. “It is what I could do at the time,” Altschul explains. She created the tiny piece in 2003, three years after she suffered a traumatic head injury that rendered her unable to walk, talk or process visual information. “I lost my working memory,” she says. Of the many paintings in her studio, the diminutive piece is a marker of the beginning of her journey to retrain and discover the resiliency of the human mind. Altschul was doing a routine cleaning job in 2000 when a wall shelf collapsed and sent Masonite boards cascading on top of her head. She was hit repeatedly and briefly knocked out. “It was a freak accident,” she says. “Life has stuff in it, and that’s the way it is.” After the accident, she was on the couch for months and began speech, occupational and physical therapy. “My world became very small,” she recalls. She had to relearn how to be mobile and communicate. Three years later, with the help of an assistance dog, she made her way back into the studio. However, she was without the “mental toolbox” she formerly used as an artist. “I didn’t know what color to

“I didn’t know what color to use or how to use it, and I could not hold an image in my head.” Painter Patricia Altschul and her canine helper in her studio

use or how to use it,” she says, “and I could not hold an image in my head.” Initially, she painted only the sky and clouds and, after a while, treetops. A few years later, she moved on to sketching small animals in order to explore form. Then, working in oils, she created images inspired by old family photographs. Altschul forged through problems such as not being able to distinguish foreground from background or remember

what she was working on from one day to the next. As a reminder, she kept a notebook. “I would wait for information to appear on the canvas,” she says. “I didn’t know what to do next.” She says it was discouraging, starting from scratch each day. “But it didn’t occur to me to not try.” Slowly, changes came. “The color wheel came back, and I started remembering that you can use green to neutralize red and orange

Back inside her home, she points to paintings created before the accident. The acrylic paintings are abstract and muted, featuring shapes reminiscent of birds. Altschul said Wallace Stevens’ poem “Thirteen Ways of Looking at a Blackbird” inspired the works, which are about time—the moment before a bird takes off. The earlier pieces are the culmination of studies at UC Davis graduate school, which she attended in the early ’80s, when Wayne Thiebaud, Manuel Neri, Cornelia