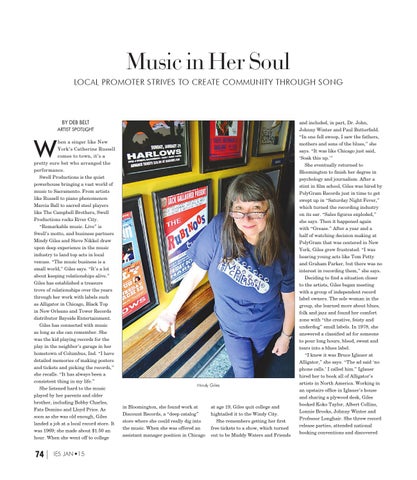 hen a singer like New York’s Catherine Russell comes to town, it’s a pretty sure bet who arranged the performance. Swell Productions is the quiet powerhouse bringing a vast world of music to Sacramento. From artists like Russell to piano phenomenon Marcia Ball to sacred steel players like The Campbell Brothers, Swell Productions rocks River City. “Remarkable music. Live” is Swell’s motto, and business partners Mindy Giles and Steve Nikkel draw upon deep experience in the music industry to land top acts in local venues. “The music business is a small world,” Giles says. “It’s a lot about keeping relationships alive.” Giles has established a treasure trove of relationships over the years through her work with labels such as Alligator in Chicago, Black Top in New Orleans and Tower Records distributor Bayside Entertainment. Giles has connected with music as long as she can remember. She was the kid playing records for the play in the neighbor’s garage in her hometown of Columbus, Ind. “I have detailed memories of making posters and tickets and picking the records,” she recalls. “It has always been a consistent thing in my life.” She listened hard to the music played by her parents and older brother, including Bobby Charles, Fats Domino and Lloyd Price. As soon as she was old enough, Giles landed a job at a local record store. It was 1969; she made about $1.50 an hour. When she went off to college

in Bloomington, she found work at Discount Records, a “deep catalog” store where she could really dig into the music. When she was offered an assistant manager position in Chicago

at age 19, Giles quit college and hightailed it to the Windy City. She remembers getting her first free tickets to a show, which turned out to be Muddy Waters and Friends

and included, in part, Dr. John, Johnny Winter and Paul Butterfield. “In one fell swoop, I saw the fathers, mothers and sons of the blues,” she says. “It was like Chicago just said, ‘Soak this up.’” She eventually returned to Bloomington to finish her degree in psychology and journalism. After a stint in film school, Giles was hired by PolyGram Records just in time to get swept up in “Saturday Night Fever,” which turned the recording industry on its ear. “Sales figures exploded,” she says. Then it happened again with “Grease.” After a year and a half of watching decision making at PolyGram that was centered in New York, Giles grew frustrated. “I was hearing young acts like Tom Petty and Graham Parker, but there was no interest in recording them,” she says. Deciding to find a situation closer to the artists, Giles began meeting with a group of independent record label owners. The sole woman in the group, she learned more about blues, folk and jazz and found her comfort zone with “the creative, feisty and underdog” small labels. In 1978, she answered a classified ad for someone to pour long hours, blood, sweat and tears into a blues label. “I knew it was Bruce Iglauer at Alligator,” she says. “The ad said ‘no phone calls.’ I called him.” Iglauer hired her to book all of Alligator’s artists in North America. Working in an upstairs office in Iglauer’s house and sharing a plywood desk, Giles booked Koko Taylor, Albert Collins, Lonnie Brooks, Johnny Winter and Professor Longhair. She threw record release parties, attended national booking conventions and discovered