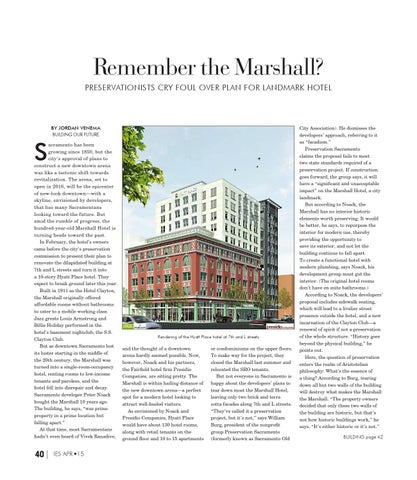 acramento has been growing since 1850, but the city’s approval of plans to construct a new downtown arena was like a tectonic shift towards revitalization. The arena, set to open in 2016, will be the epicenter of new-look downtown—with a skyline, envisioned by developers, that has many Sacramentans looking toward the future. But amid the rumble of progress, the hundred-year-old Marshall Hotel is turning heads toward the past. In February, the hotel’s owners came before the city’s preservation commission to present their plan to renovate the dilapidated building at 7th and L streets and turn it into a 10-story Hyatt Place hotel. They expect to break ground later this year. Built in 1911 as the Hotel Clayton, the Marshall originally offered affordable rooms without bathrooms to cater to a mobile working class. Jazz greats Louis Armstrong and Billie Holiday performed in the hotel’s basement nightclub, the S.S. Clayton Club. But as downtown Sacramento lost its luster starting in the middle of the 20th century, the Marshall was turned into a single-room-occupancy hotel, renting rooms to low-income tenants and parolees, and the hotel fell into disrepair and decay. Sacramento developer Peter Noack bought the Marshall 10 years ago. The building, he says, “was prime property in a prime location but falling apart.” At that time, most Sacramentans hadn’t even heard of Vivek Ranadive,

Rendering of the Hyatt Place hotel at 7th and L streets

and the thought of a downtown arena hardly seemed possible. Now, however, Noack and his partners, the Fairfield hotel firm Presidio Companies, are sitting pretty. The Marshall is within hailing distance of the new downtown arena—a perfect spot for a modern hotel looking to attract well-heeled visitors. As envisioned by Noack and Presidio Companies, Hyatt Place would have about 130 hotel rooms, along with retail tenants on the ground floor and 10 to 15 apartments

or condominiums on the upper floors. To make way for the project, they closed the Marshall last summer and relocated the SRO tenants. But not everyone in Sacramento is happy about the developers’ plans to tear down most the Marshall Hotel, leaving only two brick and terra cotta facades along 7th and L streets. “They’ve called it a preservation project, but it’s not,” says William Burg, president of the nonprofit group Preservation Sacramento (formerly known as Sacramento Old

City Association). He dismisses the developers’ approach, referring to it as “facadism.” Preservation Sacramento claims the proposal fails to meet two state standards required of a preservation project. If construction goes forward, the group says, it will have a “significant and unacceptable impact” on the Marshall Hotel, a city landmark. But according to Noack, the Marshall has no interior historic elements worth preserving. It would be better, he says, to repurpose the interior for modern use, thereby providing the opportunity to save its exterior, and not let the building continue to fall apart. To create a functional hotel with modern plumbing, says Noack, his development group must gut the interior. (The original hotel rooms don’t have en suite bathrooms.) According to Noack, the developers’ proposal includes sidewalk seating, which will lead to a livelier street presence outside the hotel, and a new incarnation of the Clayton Club—a renewal of spirit if not a preservation of the whole structure. “History goes beyond the physical building,” he points out. Here, the question of preservation enters the realm of Aristotelian philosophy: What’s the essence of a thing? According to Burg, tearing down all but two walls of the building will destroy what makes the Marshall the Marshall. “The property owners decided that only these two walls of the building are historic, but that’s not how historic buildings work,” he says. “It’s either historic or it’s not.” BUILDING page 42 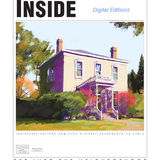