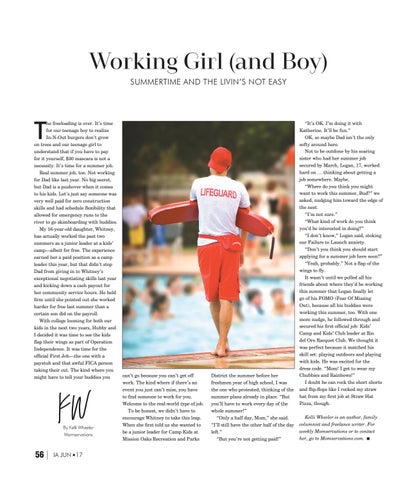 Working Girl (and Boy) SUMMERTIME AND THE LIVIN’S NOT EASY

he freeloading is over. It’s time for our teenage boy to realize In-N-Out burgers don’t grow on trees and our teenage girl to understand that if you have to pay for it yourself, $30 mascara is not a necessity. It’s time for a summer job. Real summer job, too. Not working for Dad like last year. No big secret, but Dad is a pushover when it comes to his kids. Let’s just say someone was very well paid for zero construction skills and had schedule flexibility that allowed for emergency runs to the river to go skimboarding with buddies. My 16-year-old daughter, Whitney, has actually worked the past two summers as a junior leader at a kids’ camp—albeit for free. The experience earned her a paid position as a camp leader this year, but that didn’t stop Dad from giving in to Whitney’s exceptional negotiating skills last year and kicking down a cash payout for her community service hours. He held firm until she pointed out she worked harder for free last summer than a certain son did on the payroll. With college looming for both our kids in the next two years, Hubby and I decided it was time to see the kids flap their wings as part of Operation Independence. It was time for the official First Job—the one with a paystub and that awful FICA person taking their cut. The kind where you might have to tell your buddies you

can’t go because you can’t get off work. The kind where if there’s an event you just can’t miss, you have to find someone to work for you. Welcome to the real-world type of job. To be honest, we didn’t have to encourage Whitney to take this leap. When she first told us she wanted to be a junior leader for Camp Kids at Mission Oaks Recreation and Parks

District the summer before her freshmen year of high school, I was the one who protested, thinking of the summer plans already in place. “But you’ll have to work every day of the whole summer!” “Only a half day, Mom,” she said. “I’ll still have the other half of the day left.” “But you’re not getting paid!”

“It’s OK. I’m doing it with Katherine. It’ll be fun.” OK, so maybe Dad isn’t the only softy around here. Not to be outdone by his soaring sister who had her summer job secured by March, Logan, 17, worked hard on … thinking about getting a job somewhere. Maybe. “Where do you think you might want to work this summer, Bud?” we asked, nudging him toward the edge of the nest. “I’m not sure.” “What kind of work do you think you’d be interested in doing?” “I don’t know,” Logan said, stoking our Failure to Launch anxiety. “Don’t you think you should start applying for a summer job here soon?” “Yeah, probably.” Not a flap of the wings to fly. It wasn’t until we polled all his friends about where they’d be working this summer that Logan finally let go of his FOMO (Fear Of Missing Out), because all his buddies were working this summer, too. With one more nudge, he followed through and secured his first official job: Kids’ Camp and Kids’ Club leader at Rio del Oro Racquet Club. We thought it was perfect because it matched his skill set: playing outdoors and playing with kids. He was excited for the dress code. “Mom! I get to wear my Chubbies and Rainbows!” I doubt he can rock the short shorts and flip-flops like I rocked my straw hat from my first job at Straw Hat Pizza, though. Kelli Wheeler is an author, family columnist and freelance writer. For weekly Momservations or to contact her, go to Momservations.com. n