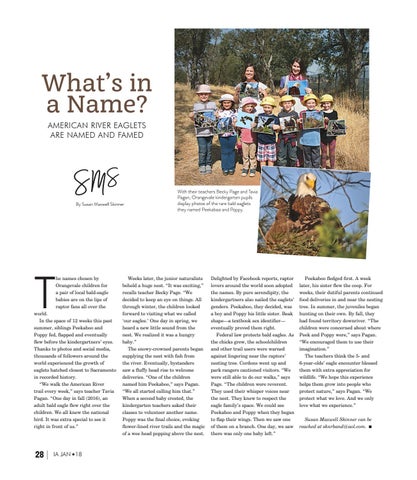 What’s in a Name? AMERICAN RIVER EAGLETS ARE NAMED AND FAMED

world. In the space of 12 weeks this past summer, siblings Peekaboo and Poppy fed, flapped and eventually flew before the kindergartners’ eyes. Thanks to photos and social media, thousands of followers around the world experienced the growth of eaglets hatched closest to Sacramento in recorded history. “We walk the American River trail every week,” says teacher Tavia Pagan. “One day in fall (2016), an adult bald eagle flew right over the children. We all knew the national bird. It was extra special to see it right in front of us.”

With their teachers Becky Page and Tavia Pagan, Orangevale kindergarten pupils display photos of the rare bald eaglets they named Peekaboo and Poppy.

Weeks later, the junior naturalists beheld a huge nest. “It was exciting,” recalls teacher Becky Page. “We decided to keep an eye on things. All through winter, the children looked forward to visiting what we called ‘our eagles.’ One day in spring, we heard a new little sound from the nest. We realized it was a hungry baby.” The snowy-crowned parents began supplying the nest with fish from the river. Eventually, bystanders saw a fluffy head rise to welcome deliveries. “One of the children named him Peekaboo,” says Pagan. “We all started calling him that.” When a second baby crested, the kindergarten teachers asked their classes to volunteer another name. Poppy was the final choice, evoking flower-lined river trails and the magic of a wee head popping above the nest.

Delighted by Facebook reports, raptor lovers around the world soon adopted the names. By pure serendipity, the kindergartners also nailed the eaglets’ genders. Peekaboo, they decided, was a boy and Poppy his little sister. Beak shape—a textbook sex identifier— eventually proved them right. Federal law protects bald eagles. As the chicks grew, the schoolchildren and other trail users were warned against lingering near the raptors’ nesting tree. Cordons went up and park rangers cautioned visitors. “We were still able to do our walks,” says Page. “The children were reverent. They used their whisper voices near the nest. They knew to respect the eagle family’s space. We could see Peekaboo and Poppy when they began to flap their wings. Then we saw one of them on a branch. One day, we saw there was only one baby left.”

Peekaboo fledged first. A week later, his sister flew the coop. For weeks, their dutiful parents continued food deliveries in and near the nesting tree. In summer, the juveniles began hunting on their own. By fall, they had found territory downriver. “The children were concerned about where Peek and Poppy were,” says Pagan. “We encouraged them to use their imagination.” The teachers think the 5- and 6-year-olds’ eagle encounter blessed them with extra appreciation for wildlife. “We hope this experience helps them grow into people who protect nature,” says Pagan. “We protect what we love. And we only love what we experience.” Susan Maxwell Skinner can be reached at sknrband@aol.com. n