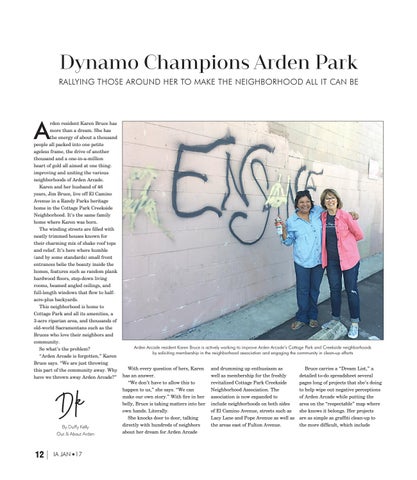 rden resident Karen Bruce has more than a dream. She has the energy of about a thousand people all packed into one petite ageless frame, the drive of another thousand and a one-in-a-million heart of gold all aimed at one thing: improving and uniting the various neighborhoods of Arden Arcade. Karen and her husband of 46 years, Jim Bruce, live off El Camino Avenue in a Randy Parks heritage home in the Cottage Park Creekside Neighborhood. It’s the same family home where Karen was born. The winding streets are filled with neatly trimmed houses known for their charming mix of shake roof tops and relief. It’s here where humble (and by some standards) small front entrances belie the beauty inside the homes, features such as random plank hardwood floors, step-down living rooms, beamed angled ceilings, and full-length windows that flow to halfacre-plus backyards. This neighborhood is home to Cottage Park and all its amenities, a 3-acre riparian area, and thousands of old-world Sacramentans such as the Bruces who love their neighbors and community. So what’s the problem? “Arden Arcade is forgotten,” Karen Bruce says. “We are just throwing this part of the community away. Why have we thrown away Arden Arcade?”

Dk By Duffy Kelly Out & About Arden

With every question of hers, Karen has an answer. “We don’t have to allow this to happen to us,” she says. “We can make our own story.” With fire in her belly, Bruce is taking matters into her own hands. Literally. She knocks door to door, talking directly with hundreds of neighbors about her dream for Arden Arcade

and drumming up enthusiasm as well as membership for the freshly revitalized Cottage Park Creekside Neighborhood Association. The association is now expanded to include neighborhoods on both sides of El Camino Avenue, streets such as Lacy Lane and Pope Avenue as well as the areas east of Fulton Avenue.

Bruce carries a “Dream List,” a detailed to-do spreadsheet several pages long of projects that she’s doing to help wipe out negative perceptions of Arden Arcade while putting the area on the “respectable” map where she knows it belongs. Her projects are as simple as graffiti clean-up to the more difficult, which include