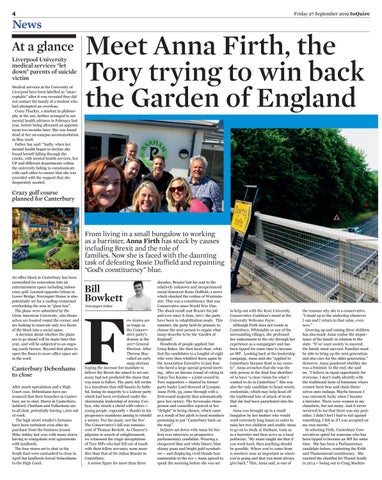 At a glance Liverpool University medical services “let down” parents of suicide victim Medical services at the University of Liverpool have been labelled as “unacceptable” after it was revealed they did not contact the family of a student who had attempted an overdose. Ceara Thacker, a student in philosophy at the uni, further arranged to see mental health advisers in February last year, before being allocated an appointment two months later. She was found dead at her on-campus accommodation in May 2018. Father Ian said: “Sadly, when her mental health began to decline she found herself falling through the cracks, with mental health services, her GP and different departments within the university failing to communicate with each other to ensure that she was provided with the support that she desperately needed.

Meet Anna Firth, the Tory trying to win back the Garden of England

From living in a small bungalow to working as a barrister, Anna Firth has stuck by causes including Brexit and the role of families. Now she is faced with the daunting task of defeating Rosie Duffield and repainting “God’s constituency” blue. An office block in Canterbury has been earmarked for renovation into an entertainment space including indoor crazy golf. Located opposite Odean in Lower Bridge, Newingate House is also potentially set for a rooftop restaurant overlooking the area in “glass box”. The plans were submitted by the Girne American University, who themselves are located round the corner, and are looking to renovate only two floors of the block into a social space. A decision about whether the plans are to go ahead will be made later this year, and will be subjected to an ongoing yearly licence. Beyond that plans to open the floors to more office space are in the work

Canterbury Debenhams to close After much speculation and a High Court case, Debenhams have announced that their branches in Canterbury are to shut. Stores in Canterbury, Ashford, Chatham and Folkestone are to all shut, potentially forcing 1,200 out of work. The high street retailer’s fortunes have been turbulent even after its purchase from the business tycoon Mike Ashley last year with many stores having to renegotiate rent agreements with landlords. The four stores set to shut in the South East were earmarked to close in April but landlords forced Debenhams to the High Court.

ew stories are as tragic as the Conservative party’s demise at the 2017 General Election. After Theresa May called an early snap election hoping the increase her mandate to deliver the Brexit she aimed to set out, many had not predicted the chaos that was soon to follow. The party fell victim to a manifesto that still haunts its faithful, losing its majority to a Labour party which had been revitalised under the charismatic leadership of Jeremy Corbyn, who struck a chord with voters – young people, especially – thanks to his progressive manifesto aiming to rebuild a society ‘For the many, not the few’. The Conservative’s fall was reminiscent of Thomas Beckett. As Chaucer’s pilgrims in search of enlightenment, we witnessed the tragic decapitation of Tory MPs who had fell out of touch with their fellow servants; none more dire than that of Sir Julian Brazier in Canterbury. A senior figure for more than three

decades, Brazier lost his seat to the relatively unknown and inexperienced social democrat Rosie Duffield, a move which shocked the realms of Westminster. This was a constituency that was Conservative since World War One. The shock result cost Brazier his job and ever since 8 June, 2017, the party have been in rehabilitation mode. This summer, the party held its primary to choose the next person to regain what many describe to be the ‘Garden of England’. Hundreds of people applied, but Grieg Baker, the then local chair, whittled the candidates to a longlist of eight who were then whittled down again by the Association Executive to just four who faced a large special general meeting. After an intense round of voting in Tokyo Tea Rooms – a joint owned by Tory supporters – chaired by former party leader Lord Howard of Lympne, Anna Firth, 53, came through with a first-round majority that automatically gave her victory. The Sevenoaks chairperson and councillor rejoiced at her “delight” in being chosen, which came as a result of her pitch to local members promising to put “Canterbury back on the map”. InQuire sat down with Anna for her first ever interview as prospective parliamentary candidate. Wearing a chequered blue and white blazer, blue skinny jeans and bright gold eyeshadow – and displaying vivid blonde hair unmissable to the eye – Anna agreed to speak the morning before she was set

to help out with the Kent University Conservative Coalition’s stand at the University Welcome Fayre. Although Firth does not reside in Canterbury, Whitstable or any of the surrounding villages, she professed her endearment to the city through her experience as a campaigner and has been tipped for some time to become an MP. Looking back at the leadership campaign, Anna said she “applied to Canterbury because Kent is my county”. Anna avouches that she was the only person in the final four shortlisted to have “a clear vision for what I wanted to do in Canterbury”. She was also the only candidate to boast county credentials, which may help head off the traditional line of attack of rivals that she had been parachuted into the seat. Anna was brought up in a small bungalow by her mother who would work extremely long hours in order to raise her two children and enable Anna to go on to study at Durham, train as as a barrister and then serve as a local politician. “My mum taught me that if you work hard, then anything should be possible. Where you’ve come from is nowhere near as important as where you’re going and that you must always give back.” This, Anna said, is one of

the reasons why she is a conservative. “I stand up to the underdog whenever I can and I return to that value, even now.” Growing up and raising three children has also made Anna realise the importance of the family in relation to the state. “If we want society to succeed, the family must succeed. Families must be able to bring up the next generation and also care for the older generation.” However, Anna pondered whether she was a feminist. In the end, she said no. “I believe in equal opportunity for everyone. I don’t really identify with the traditional form of feminism where women burn bras and chain themselves onto railings. Maybe because I was extremely lucky when I became a barrister. There were women in my chambers, but not many. And it never occurred to me that there was any prejudice. I didn’t feel I had to rail against something. I felt as if I was accepted on my own merits.” In selecting Firth, Canterbury Conservatives opted for someone who has been tipped to become an MP for some time. She has been a Parliamentary candidate before, contesting the Erith and Thamesmead constituency. She reached the shortlist for Thanet South in 2014 – losing out to Craig Mackin-