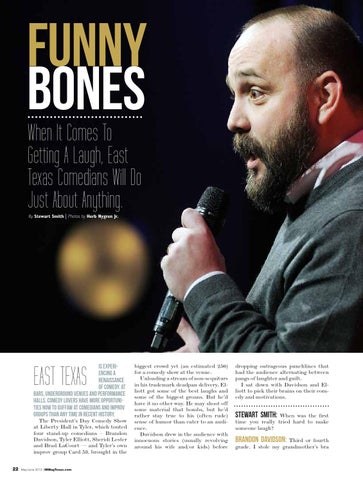 Funny bones When It Comes To Getting A Laugh, East Texas Comedians Wil Do Just About Anything. By Stewart Smith | Photos by Herb Nygren Jr.

is experiencing a renaissance of comedy. At bars, underground venues and performance halls, comedy lovers have more opportunities now to guffaw at comedians and improv groups than any time in recent history.

biggest crowd yet (an estimated 250) for a comedy show at the venue. Unloading a stream of non-sequiturs in his trademark deadpan delivery, Elliott got some of the best laughs and some of the biggest groans. But he’d have it no other way. He may shoot off some material that bombs, but he’d rather stay true to his (often rude) sense of humor than cater to an audience. Davidson drew in the audience with innocuous stories (usually revolving around his wife and/or kids) before

dropping outrageous punchlines that had the audience alternating between pangs of laughter and guilt. I sat down with Davidson and Elliott to pick their brains on their comedy and motivations.

Stewart Smith: When was the first time you really tried hard to make someone laugh? Brandon Davidson: Third or fourth grade. I stole my grandmother’s bra

IN Magazine offers an extensive, well-rounded array of topics for readers from all demographics. 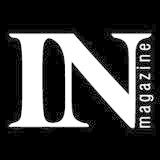 More from IN Magazine