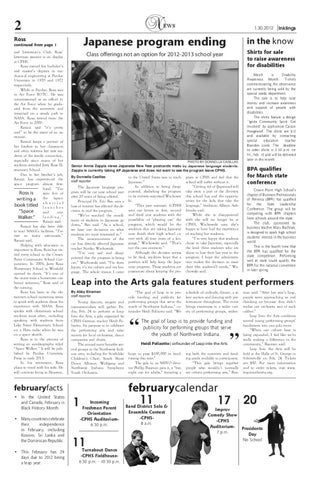 The Japanese language program will be cut next school year after 20 years of being offered. Principal Dr. Eric Ban says a loss of interest has affected the decision to end the program. “We’ve watched the enrollment of students in Japanese go down,” Ban said. “As a school, we base our decisions on what students are most interested in.” The announcement of the cut has directly affected Japanese teacher Noriko Wachowski. “I’m very sad and disappointed that the program is being cut,” Wachowski said. “I’m from Japan; it’s my culture and my language. The whole reason I came

to the United States was to teach Japanese.” In addition to being disappointed, abolishing the program in its entirety surprised Wachowski. “This past summer, (CPHS) sent out letters to first, second and third year students with the possibility of ‘phasing out’ the program, which would let the students that are taking Japanese now finish their high school career with all four years of a language,” Wachowski said. “That’s not the case anymore.” Although the decision seems to be final, students hope that a petition will help keep the Japanese program. These students are passionate about keeping the pro-

gram at CPHS and feel that the school will suffer without it. “Getting rid of (Japanese) will take away a part of the diversity this school has and the opportunities for the kids that take the language,” freshman Allison Ashbrooks said. While she is disappointed with she will no longer be at CPHS, Wachowski says she’s happy to have had the experience of teaching her students. “I’m very happy that students chose to take Japanese, especially the level three students who are about to lose their last year in the program. I hope the administration makes the decision to meet their (the students’) needs,” Wachowski said.

March is Disability Awareness Month. T-shirts commemorating the observance are currently being sold by the special needs department. The sale is to help raise money and increase awareness and support of people with disabilities. The shirts feature a design “Ignite Community Spirit: Get Involved” by sophomore Carson Hoogewerf. The shirts are $12 and available by contacting special education teacher Branden Lorek. The deadline to order shirts is 2:30 p.m. on Fri., Feb. 10 and will be delivered later in the month.

BPA qualifies for March state conference Crown Point High School’s chapter of Business Professionals of America (BPA) has qualified for the State Leadership Conference. The group will be competing with BPA chapters from schools around the state. The club, sponsored by business teacher Mary Bachnak, is designed to spark high school students’ interest in the business world. This is the fourth time that the BPA has qualified for the state competition. Performing well at state could qualify the BPA for the national convention in later spring.

Young dancers, singers and instrumentalists will gather Friday, Feb. 24 to perform at Leap Into the Arts, a gala organized by CPHS German teacher Heidi Polizotto. Its purpose is to celebrate the performing arts and raise money for local orchestras, dance companies and choirs. The annual event benefits several groups in the Northwest Indiana area, including the Southlake Children’s Choir, South Shore Dance Alliance, Wolfgang and Northwest Indiana Symphony Youth Orchestra.

“The goal of Leap is to provide funding and publicity for performing groups that serve the youth of Northwest Indiana,” cofounder Heidi Polizotto said. “We

schedule of cocktails, dinner, a silent auction and dancing with performances throughout. The event brings awareness to a wider variety of performing groups, widen-

The goal of Leap is to provide funding and publicity for performing groups that serve the youth of Northwest Indiana.

• Many countries celebrate their independence in February, including Kosovo, Sri Lanka and the Dominican Republic.

Shirts for sale to raise awareness for disabilities

februaryfacts • In the United States and Canada, February is Black History Month.

and Letterman’s Club. Ross’ letterman sweater is on display at CPHS. Ross earned his bachelor’s and master’s degrees in mechanical engineering at Purdue University in 1970 and 1972 respectively. While at Purdue, Ross was in Air Force ROTC. He was commissioned as an officer in the Air Force when he graduated from the university and remained on a steady path to NASA. Ross retired from the Air Force in 2000. Ratazzi said “it’s pretty cool” to be the sister of an astronaut. Ratazzi keeps a portrait of her brother in her classroom and often informs her new students of the family connection, especially since many of her students attended Jerry Ross Elementary School. Due to her brother’s job, Ratazzi has experienced the space program almost firsthand. “I’ve Ross is seen five of writing a the (space shuttle) book titled l a u n c h e s “Space and one landing,” Walker.” Ratazzi said. Ratazzi has also been able to tour NASA’s facilities. “I’ve met so many astronauts,” Ratazzi said. Helping with education is important to Ross. Ross has visited every school in the Crown Point Community School Corporation. In 2003, Jerry Ross Elementary School in Winfield opened its doors. “It’s one of the nicest ways a hometown can honor someone,” Ross said of the naming. Ross has been to the elementary school numerous times to speak with students about his experience with NASA. Ross speaks with elementary school students most often, including speaking with students from Lake Street Elementary School on a Ham radio when he was on a space shuttle. Ross is in the process of writing an autobiography titled “Space Walker.” It will be published by Purdue University Press in early 2013. In his retirement, Ross plans to travel with his wife. He will continue living in Houston.

Heidi Polizotto cofounder of Leap into the Arts hope to pass $100,000 in fundraising this year.” The gala is, as NISYO director Phillip Bauman puts it, a “fun night out for adults,” featuring a

ing both the notoriety and funding pools available to participants. “This gala brings together people who wouldn’t normally see certain performing arts,” Bau-

man said. “After last year’s Leap, people were approaching us and thanking us because they didn’t realize our orchestra was of such caliber.” Leap Into the Arts combines several young performing groups’ fundraisers into one gala event. “When our culture base is being expanded, I feel like we’re really making a difference in the community,” Bauman said. Leap Into the Arts will be held at the Halls of St. George in Schererville on Feb. 24. Tickets are $50. For more information and to order tickets, visit www. leapintothearts.org. 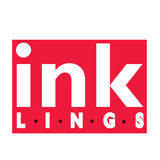