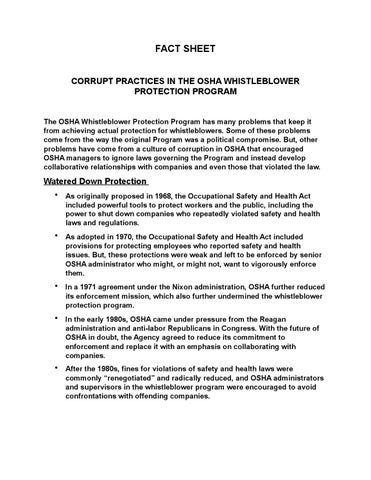 The OSHA Whistleblower Protection Program has many problems that keep it from achieving actual protection for whistleblowers. Some of these problems come from the way the original Program was a political compromise. But, other problems have come from a culture of corruption in OSHA that encouraged OSHA managers to ignore laws governing the Program and instead develop collaborative relationships with companies and even those that violated the law.

As originally proposed in 1968, the Occupational Safety and Health Act included powerful tools to protect workers and the public, including the power to shut down companies who repeatedly violated safety and health laws and regulations.

As adopted in 1970, the Occupational Safety and Health Act included provisions for protecting employees who reported safety and health issues. But, these protections were weak and left to be enforced by senior OSHA administrator who might, or might not, want to vigorously enforce them.

In a 1971 agreement under the Nixon administration, OSHA further reduced its enforcement mission, which also further undermined the whistleblower protection program.

In the early 1980s, OSHA came under pressure from the Reagan administration and anti-labor Republicans in Congress. With the future of OSHA in doubt, the Agency agreed to reduce its commitment to enforcement and replace it with an emphasis on collaborating with companies.

After the 1980s, fines for violations of safety and health laws were commonly “renegotiated” and radically reduced, and OSHA administrators and supervisors in the whistleblower program were encouraged to avoid confrontations with offending companies.

Beginning in the 1970s, the government began reducing its direct protections for workplace and public safety and health, relying instead on workers to report safety and health concerns. This began by creating the Whistleblower Protection Program as part of the Occupational Safety and Health Act in 1970.

Beginning in the 1990s, Congress began to expand not only the authority of the OSHA Whistleblower Protection Program, but also its power to protect workers in key economic areas. Known as “preliminary reinstatement statutes”, these new laws provided that truck drivers and other workers in the motor carrier industry should be immediately reinstated to their jobs and “made whole” with regard to other economic damages, when an investigation of their complaint confirmed them as qualified whistleblowers. From 2000, all other additions to the authority of the Program extended these same protections to more and more workers, including those working in the air carrier industry, the financial and consumer financial sectors, public transportation, consumer products, the health care industry, and food handling and processing activities.

There have been long-standing complaints by workers and their union and legal representatives that the OSHA Whistleblower Protection Program is not working.

On-site OSHA inspections are spotty and in some cases, such as the fertilizer plant in West, Texas, that exploded, may not occur for decades.

It is very hard to qualify as a whistleblower, in part because the process of filing a whistleblower complaint is opaque and the rules are designed to limit the number of workers who are qualified.

Statistical accounts of the Program show that the majority of workers who attempt to file a complaint are “screened out” even before they have their complaints investigated.

Statistical accounts of the Program show that even when complaints are investigated, it is very, very rare for OSHA to issue a merit finding against a company, and particularly against a major corporation.

Evidence is that some OSHA supervisors collaborate with large corporations to dismiss otherwise merit complaints.

Evidence is that some OSHA supervisors bully workers into settling their complaints for pennies on the dollar.

Evidence is that some OSHA supervisors will retaliate against workers who complain about OSHA’s treatment of their complaints.

Evidence is that even when an OSHA investigation finds merit in a complaint, the Department of Labor attorneys commonly refuse to take action to support the complainant.

A recent report from the Department of Transportation reported a spike in fatal highway accidents involving trucks. These accidents are preventable because many result from drivers forced to drive long hours and with poorly maintained trucks.

The explosion at West, Texas, in 2013 killed 15 people, including 12 volunteer firemen and destroyed half the town. OSHA had not inspected the site for 25 years.

The explosion of the oil-drilling rig “Deep Water Horizon” in 2010 not only killed more than a dozen workers, it polluted the entire Gulf of Mexico and caused more than $100 billion dollars in damage.

The 2010 explosion of a gas pipeline in San Bruno, California, killed eight and destroyed a neighborhood.

The 2000 fatal crash of Alaska Airline’s Flight 261 near Los Angeles in 2000, which killed 80 people, was the result of a defective part that Alaska Airlines mechanics had reported. These reports were ignored by the

company and by the Federal Aviation Administration. At the time, these workers were not protected by whistleblower protection laws. •

A complaint was filed with OSHA’s Whistleblower Protection Program by an employee of the Country Wide Mortgage in 2007. The employee reported that the company was colluding with real estate agents to inflate the value of houses. OSHA dismissed the complaint on dubious grounds, which meant that OSHA did not inform the Securities and Exchange Commission of this problem, which meant that the SEC did not investigate. The “Great Recession” that began in 2009 was rooted in the falsification of values in home lending.

In 2010, whistleblower complaints were filed by the two senior quality assurance managers employed by the nation’s largest industrial testing company. The complaint alleged that the company was issuing tens of thousands of false asbestos test reports, which put in doubt protections against exposure to asbestos for construction workers, school children, defense workers, and others who might be exposed. Mesothelioma, a fatal condition caused by exposure to asbestos, can take up to 20 years to appear. OSHA attempted to dismiss these complaints before they were investigated, then attacked one of the managers and dismissed his complaint when he complained about OSHA’s management of the investigation. Subsequently, OSHA failed to report to other agencies that the investigation had found merit in the managers’ complaints. As a consequence, the company continued to issue faulty asbestos tests for several years.

In 2010, the senior safety officer of a nuclear plant filed a whistleblower complaint with OSHA, alleging the utility company that operated the plant had engaged in a series of violations that undermined the safety and security of the plant. The safety officer was an experience nuclear specialist highly respected among nuclear specialist, and his complaint was supported by two earlier investigations that found he had been fired for raising safety and health issues. OSHA managers, however, dismissed his complaint after receiving opposition from the utility company.

These incidents reflect only a small sample of how OSHA’s failure to protect whistleblowers puts the public at risk. Other incidents can be found with investigations concerning trucking, railroads, environmental pollution, and the hospitality industry. So long as these failures continue, no one and no place can be safe from preventable safety and health risks. The OSHA Whistleblower Protection Program has many problems that keep it from achieving actual protection for whistleblowers. Some of these...

The OSHA Whistleblower Protection Program has many problems that keep it from achieving actual protection for whistleblowers. Some of these...