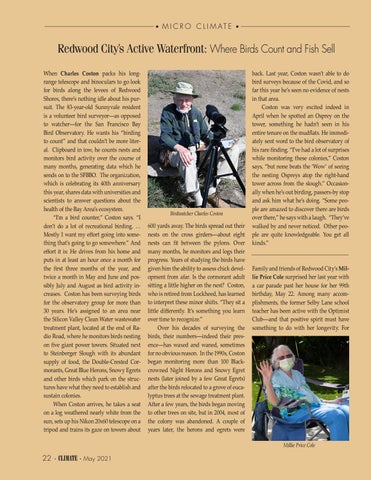 Redwood City’s Active Waterfront: Where Birds Count and Fish Sell When Charles Coston packs his longrange telescope and binoculars to go look for birds along the levees of Redwood Shores, there’s nothing idle about his pursuit. The 83-year-old Sunnyvale resident is a volunteer bird surveyor—as opposed to watcher—for the San Francisco Bay Bird Observatory. He wants his “birding to count” and that couldn’t be more literal. Clipboard in tow, he counts nests and monitors bird activity over the course of many months, generating data which he sends on to the SFBBO. The organization, which is celebrating its 40th anniversary this year, shares data with universities and scientists to answer questions about the health of the Bay Area’s ecosystem. “I’m a bird counter,” Coston says. “I don’t do a lot of recreational birding. … Mostly I want my effort going into something that’s going to go somewhere.” And effort it is: He drives from his home and puts in at least an hour once a month for the first three months of the year, and twice a month in May and June and possibly July and August as bird activity increases. Coston has been surveying birds for the observatory group for more than 30 years. He’s assigned to an area near the Silicon Valley Clean Water wastewater treatment plant, located at the end of Radio Road, where he monitors birds nesting on five giant power towers. Situated next to Steinberger Slough with its abundant supply of food, the Double-Crested Cormorants, Great Blue Herons, Snowy Egrets and other birds which park on the structures have what they need to establish and sustain colonies. When Coston arrives, he takes a seat on a log weathered nearly white from the sun, sets up his Nikon 20x60 telescope on a tripod and trains its gaze on towers about

600 yards away. The birds spread out their nests on the cross girders—about eight nests can fit between the pylons. Over many months, he monitors and logs their progress. Years of studying the birds have given him the ability to assess chick development from afar. Is the cormorant adult sitting a little higher on the nest? Coston, who is retired from Lockheed, has learned to interpret these minor shifts. “They sit a little differently. It’s something you learn over time to recognize.” Over his decades of surveying the birds, their numbers—indeed their presence—has waxed and waned, sometimes for no obvious reason. In the 1990s, Coston began monitoring more than 100 Blackcrowned Night Herons and Snowy Egret nests (later joined by a few Great Egrets) after the birds relocated to a grove of eucalyptus trees at the sewage treatment plant. After a few years, the birds began moving to other trees on site, but in 2004, most of the colony was abandoned. A couple of years later, the herons and egrets were

back. Last year, Coston wasn’t able to do bird surveys because of the Covid, and so far this year he’s seen no evidence of nests in that area. Coston was very excited indeed in April when he spotted an Osprey on the tower, something he hadn’t seen in his entire tenure on the mudflats. He immediately sent word to the bird observatory of his rare finding. “I’ve had a lot of surprises while monitoring these colonies,” Coston says, “but none beats the ‘Wow’ of seeing the nesting Ospreys atop the right-hand tower across from the slough.” Occasionally when he’s out birding, passers-by stop and ask him what he’s doing. “Some people are amazed to discover there are birds over there,” he says with a laugh. “They’ve walked by and never noticed. Other people are quite knowledgeable. You get all kinds.”

Family and friends of Redwood City’s Millie Price Cole surprised her last year with a car parade past her house for her 99th birthday, May 22. Among many accomplishments, the former Selby Lane school teacher has been active with the Optimist Club—and that positive spirit must have something to do with her longevity. For