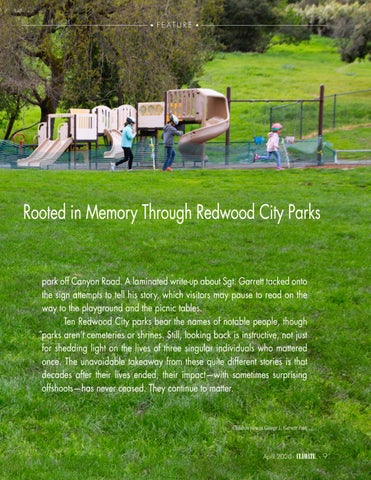 park off Canyon Road. A laminated write-up about Sgt. Garrett tacked onto the sign attempts to tell his story, which visitors may pause to read on the way to the playground and the picnic tables. Ten Redwood City parks bear the names of notable people, though parks aren’t cemeteries or shrines. Still, looking back is instructive, not just for shedding light on the lives of three singular individuals who mattered once. The unavoidable takeaway from these quite different stories is that decades after their lives ended, their impact—with sometimes surprising offshoots—has never ceased. They continue to matter.