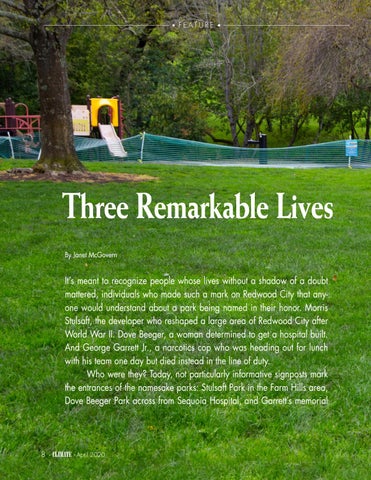 It’s meant to recognize people whose lives without a shadow of a doubt mattered, individuals who made such a mark on Redwood City that anyone would understand about a park being named in their honor. Morris Stulsaft, the developer who reshaped a large area of Redwood City after World War II. Dove Beeger, a woman determined to get a hospital built. And George Garrett Jr., a narcotics cop who was heading out for lunch with his team one day but died instead in the line of duty. Who were they? Today, not particularly informative signposts mark the entrances of the namesake parks: Stulsaft Park in the Farm Hills area, Dove Beeger Park across from Sequoia Hospital, and Garrett’s memorial