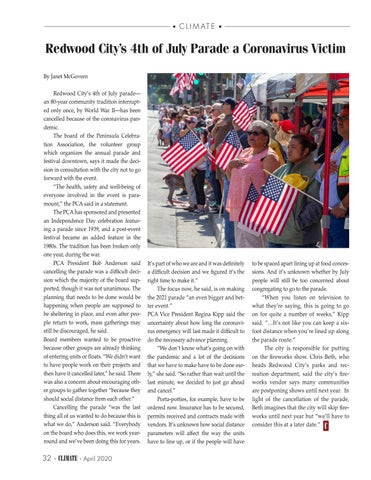 Redwood City’s 4th of July Parade a Coronavirus Victim By Janet McGovern Redwood City’s 4th of July parade— an 80-year community tradition interrupted only once, by World War II—has been cancelled because of the coronavirus pandemic. The board of the Peninsula Celebration Association, the volunteer group which organizes the annual parade and festival downtown, says it made the decision in consultation with the city not to go forward with the event. “The health, safety and well-being of everyone involved in the event is paramount,” the PCA said in a statement. The PCA has sponsored and presented an Independence Day celebration featuring a parade since 1939, and a post-event festival became an added feature in the 1980s. The tradition has been broken only one year, during the war. PCA President Bob Anderson said cancelling the parade was a difficult decision which the majority of the board supported, though it was not unanimous. The planning that needs to be done would be happening when people are supposed to be sheltering in place, and even after people return to work, mass gatherings may still be discouraged, he said. Board members wanted to be proactive because other groups are already thinking of entering units or floats. “We didn’t want to have people work on their projects and then have it cancelled later,” he said. There was also a concern about encouraging other groups to gather together “because they should social distance from each other.” Cancelling the parade “was the last thing all of us wanted to do because this is what we do,” Anderson said. “Everybody on the board who does this, we work yearround and we’ve been doing this for years.

It’s part of who we are and it was definitely a difficult decision and we figured it’s the right time to make it.” The focus now, he said, is on making the 2021 parade “an even bigger and better event.” PCA Vice President Regina Kipp said the uncertainty about how long the coronavirus emergency will last made it difficult to do the necessary advance planning. “We don’t know what’s going on with the pandemic and a lot of the decisions that we have to make have to be done early,” she said. “So rather than wait until the last minute, we decided to just go ahead and cancel.” Porta-potties, for example, have to be ordered now. Insurance has to be secured, permits received and contracts made with vendors. It’s unknown how social distance parameters will affect the way the units have to line up, or if the people will have

to be spaced apart lining up at food concessions. And it’s unknown whether by July people will still be too concerned about congregating to go to the parade. “When you listen on television to what they’re saying, this is going to go on for quite a number of weeks,” Kipp said. “…It’s not like you can keep a sixfoot distance when you’re lined up along the parade route.” The city is responsible for putting on the fireworks show. Chris Beth, who heads Redwood City’s parks and recreation department, said the city’s fireworks vendor says many communities are postponing shows until next year. In light of the cancellation of the parade, Beth imagines that the city will skip fireworks until next year but “we’ll have to consider this at a later date.” C