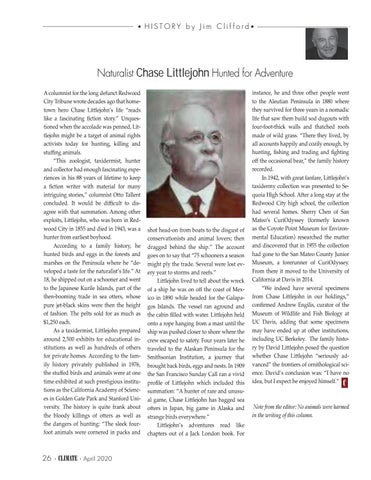 Naturalist Chase Littlejohn Hunted for Adventure A columnist for the long defunct Redwood City Tribune wrote decades ago that hometown hero Chase Littlejohn’s life “reads like a fascinating fiction story.” Unquestioned when the accolade was penned, Littlejohn might be a target of animal rights activists today for hunting, killing and stuffing animals. “This zoologist, taxidermist, hunter and collector had enough fascinating experiences in his 88 years of lifetime to keep a fiction writer with material for many intriguing stories,” columnist Otto Tallent concluded. It would be difficult to disagree with that summation. Among other exploits, Littlejohn, who was born in Redwood City in 1855 and died in 1943, was a hunter from earliest boyhood. According to a family history, he hunted birds and eggs in the forests and marshes on the Peninsula where he “developed a taste for the naturalist’s life.” At 18, he shipped out on a schooner and went to the Japanese Kurile Islands, part of the then-booming trade in sea otters, whose pure jet-black skins were then the height of fashion. The pelts sold for as much as $1,250 each. As a taxidermist, Littlejohn prepared around 2,500 exhibits for educational institutions as well as hundreds of others for private homes. According to the family history privately published in 1976, the stuffed birds and animals were at one time exhibited at such prestigious institutions as the California Academy of Sciences in Golden Gate Park and Stanford University. The history is quite frank about the bloody killings of otters as well as the dangers of hunting: “The sleek fourfoot animals were cornered in packs and

shot head-on from boats to the disgust of conservationists and animal lovers; then dragged behind the ship.” The account goes on to say that “75 schooners a season might ply the trade. Several were lost every year to storms and reefs.” Littlejohn lived to tell about the wreck of a ship he was on off the coast of Mexico in 1890 while headed for the Galapagos Islands. The vessel ran aground and the cabin filled with water. Littlejohn held onto a rope hanging from a mast until the ship was pushed closer to shore where the crew escaped to safety. Four years later he traveled to the Alaskan Peninsula for the Smithsonian Institution, a journey that brought back birds, eggs and nests. In 1909 the San Francisco Sunday Call ran a vivid profile of Littlejohn which included this summation: “A hunter of rare and unusual game, Chase Littlejohn has bagged sea otters in Japan, big game in Alaska and strange birds everywhere.” Littlejohn’s adventures read like chapters out of a Jack London book. For

instance, he and three other people went to the Aleutian Peninsula in 1880 where they survived for three years in a nomadic life that saw them build sod dugouts with four-foot-thick walls and thatched roofs made of wild grass. “There they lived, by all accounts happily and cozily enough, by hunting, fishing and trading and fighting off the occasional bear,” the family history recorded. In 1942, with great fanfare, Littlejohn’s taxidermy collection was presented to Sequoia High School. After a long stay at the Redwood City high school, the collection had several homes. Sherry Chen of San Mateo‘s CuriOdyssey (formerly known as the Coyote Point Museum for Environmental Education) researched the matter and discovered that in 1955 the collection had gone to the San Mateo County Junior Museum, a forerunner of CuriOdyssey. From there it moved to the University of California at Davis in 2014. “We indeed have several specimens from Chase Littlejohn in our holdings,” confirmed Andrew Engilis, curator of the Museum of Wildlife and Fish Biology at UC Davis, adding that some specimens may have ended up at other institutions, including UC Berkeley. The family history by David Littlejohn posed the question whether Chase Littlejohn “seriously advanced” the frontiers of ornithological science. David’s conclusion was: “I have no idea, but I expect he enjoyed himself.” C Note from the editor: No animals were harmed in the writing of this column.