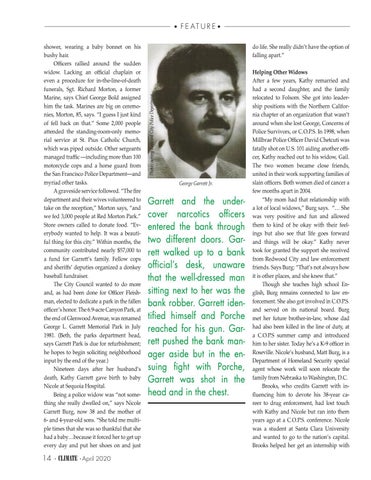 do life. She really didn’t have the option of falling apart.”

shower, wearing a baby bonnet on his bushy hair. Officers rallied around the sudden widow. Lacking an official chaplain or even a procedure for in-the-line-of-death funerals, Sgt. Richard Morton, a former Marine, says Chief George Bold assigned him the task. Marines are big on ceremonies, Morton, 85, says. “I guess I just kind of fell back on that.” Some 2,000 people attended the standing-room-only memorial service at St. Pius Catholic Church, which was piped outside. Other sergeants managed traffic —including more than 100 motorcycle cops and a horse guard from the San Francisco Police Department—and myriad other tasks. A graveside service followed. “The fire department and their wives volunteered to take on the reception,” Morton says, “and we fed 3,000 people at Red Morton Park.” Store owners called to donate food. “Everybody wanted to help. It was a beautiful thing for this city.” Within months, the community contributed nearly $57,000 to a fund for Garrett’s family. Fellow cops and sheriffs’ deputies organized a donkey baseball fundraiser. The City Council wanted to do more and, as had been done for Officer Fleishman, elected to dedicate a park in the fallen officer’s honor. The 6.9-acre Canyon Park, at the end of Glenwood Avenue, was renamed George L. Garrett Memorial Park in July 1981. (Beth, the parks department head, says Garrett Park is due for refurbishment; he hopes to begin soliciting neighborhood input by the end of the year.) Nineteen days after her husband’s death, Kathy Garrett gave birth to baby Nicole at Sequoia Hospital. Being a police widow was “not something she really dwelled on,” says Nicole Garrett Burg, now 38 and the mother of 6- and 4-year-old sons. “She told me multiple times that she was so thankful that she had a baby…because it forced her to get up every day and put her shoes on and just

Garrett and the undercover narcotics officers entered the bank through two different doors. Garrett walked up to a bank official’s desk, unaware that the well-dressed man sitting next to her was the bank robber. Garrett identified himself and Porche reached for his gun. Garrett pushed the bank manager aside but in the ensuing fight with Porche, Garrett was shot in the head and in the chest.

Helping Other Widows After a few years, Kathy remarried and had a second daughter, and the family relocated to Folsom. She got into leadership positions with the Northern California chapter of an organization that wasn’t around when she lost George, Concerns of Police Survivors, or C.O.P.S. In 1998, when Millbrae Police Officer David Chetcuti was fatally shot on U.S. 101 aiding another officer, Kathy reached out to his widow, Gail. The two women became close friends, united in their work supporting families of slain officers. Both women died of cancer a few months apart in 2004. “My mom had that relationship with a lot of local widows,” Burg says. “… She was very positive and fun and allowed them to kind of be okay with their feelings but also see that life goes forward and things will be okay.” Kathy never took for granted the support she received from Redwood City and law enforcement friends. Says Burg: “That’s not always how it is other places, and she knew that.” Though she teaches high school English, Burg remains connected to law enforcement. She also got involved in C.O.P.S. and served on its national board. Burg met her future brother-in-law, whose dad had also been killed in the line of duty, at a C.O.P.S summer camp and introduced him to her sister. Today he’s a K-9 officer in Roseville. Nicole’s husband, Matt Burg, is a Department of Homeland Security special agent whose work will soon relocate the family from Nebraska to Washington, D.C. Brooks, who credits Garrett with influencing him to devote his 38-year career to drug enforcement, had lost touch with Kathy and Nicole but ran into them years ago at a C.O.P.S. conference. Nicole was a student at Santa Clara University and wanted to go to the nation’s capital. Brooks helped her get an internship with