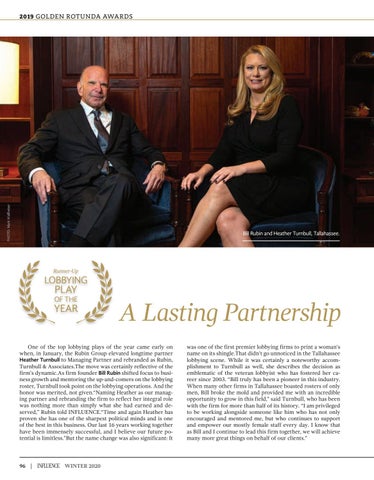 One of the top lobbying plays of the year came early on when, in January, the Rubin Group elevated longtime partner Heather Turnbull to Managing Partner and rebranded as Rubin, Turnbull &amp; Associates.The move was certainly reflective of the firm’s dynamic.As firm founder Bill Rubin shifted focus to business growth and mentoring the up-and-comers on the lobbying roster, Turnbull took point on the lobbying operations. And the honor was merited, not given.“Naming Heather as our managing partner and rebranding the firm to reflect her integral role was nothing more than simply what she had earned and deserved,” Rubin told INFLUENCE.“Time and again Heather has proven she has one of the sharpest political minds and is one of the best in this business. Our last 16 years working together have been immensely successful, and I believe our future potential is limitless.”But the name change was also significant: It

was one of the first premier lobbying firms to print a woman’s name on its shingle.That didn’t go unnoticed in the Tallahassee lobbying scene. While it was certainly a noteworthy accomplishment to Turnbull as well, she describes the decision as emblematic of the veteran lobbyist who has fostered her career since 2003. “Bill truly has been a pioneer in this industry. When many other firms in Tallahassee boasted rosters of only men, Bill broke the mold and provided me with an incredible opportunity to grow in this field,” said Turnbull, who has been with the firm for more than half of its history. “I am privileged to be working alongside someone like him who has not only encouraged and mentored me, but who continues to support and empower our mostly female staff every day. I know that as Bill and I continue to lead this firm together, we will achieve many more great things on behalf of our clients.”

Featuring Florida’s Politicians of the Year for 2019. 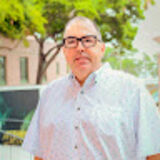