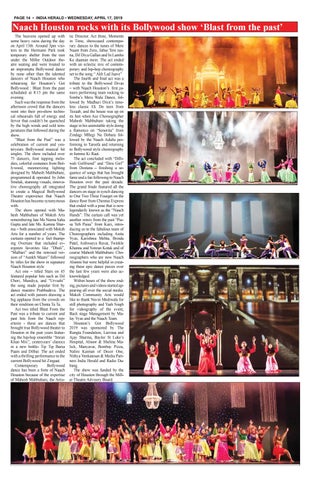 Naach Houston rocks with its Bollywood show ‘Blast from the past’ The heavens opened up with some heavy rains during the day on April 13th. Around 3pm visitors to the Hermann Park took temporary shelter from the rain under the Miller Outdoor theatre seating and were treated to an impromptu Bollywood dance by none other than the talented dancers of Naach Houston who rehearsing for Houston’s Got Bollywood : Blast from the past scheduled at 8:15 pm the same evening. Such was the response from the afternoon crowd that the dancers went into their pre-show technical rehearsals full of energy and fervor that couldn’t be quenched by the high winds and cold temperatures that followed during the show. “Blast from the Past” was a celebration of current and yesteryears Bollywood musical hit singles. The show included over 75 dancers, foot tapping melodies, colorful costumes from Bollywood, mesmerizing lighting designed by Mahesh Mahbubani, programmed &amp; operated by John Smetak, stunning visuals, innovative choreography all integrated to create a Magical Bollywood Theatre experience that Naach Houston has become synonymous with. The show opened with Mahesh Mahbubani of Moksh Arts remembering late Ms Neena Saha Gupta and late Ms. Kamna Sharma – both associated with Moksh Arts for a number of years. The curtains opened to a feet thumping Overture that included evergreen favorites like “Dholi”, “Malhari” and the remixed version of “Aankh Maare” followed by titles for the show in signature Naach Houston style Act one – titled Stars on 45 featured popular hits such as Dil Chori, Mundiya, and “Urvashi” the song made popular ﬁrst by dance maestro Prabhudeva. The act ended with juniors drawing a big applause from the crowds on their rendition on Chinta Ta Ta. Act two titled Blast From the Past was a tribute to current and past hits from the Naach repertoire - these are dances that brought true Bollywood theater to Houston in the past years featuring the hip-hop ensemble “Imran Khan Mix”, yesteryears’ classics in a new bottle- Tip Tip Barsa Paani and Dilbar. The act ended with a thrilling performance to the current Bollywood hit Zingaat. Contemporary Bollywood dance has been a forte of Naach Houston because of the expertise of Mahesh Mahbubani, the Artis-

tic Director. Act three, Moments in Time, showcased contemporary dances to the tunes of Mere Naam from Zero, Jabse Tere naina, Dil Diya Gallan and In Lamho Ke daaman mein. The act ended with an eclectic mix of contemporary and hip-hop choreography set to the song “ Akh Lad Jaave” The fourth and ﬁnal act was a tribute to the Bollywood Divas – with Naach Houston’s ﬁrst juniors performing team rocking to Simba’s Mera Wala Dance, followed by Madhuri Dixit’s timeless classic Ek Do teen from Tezaab, and the house was up on its feet when Ace Choreographer Mahesh Mahbubani taking the stage in his unimitable style doing a ﬂamenco on “Senorita” from Zindagi MIlegi Na Dobara followed by the Naach Adults performing to Tareefa and returning to Bollywood style choreography in Jumme Ki Raat. The act concluded with “Dilliwali Girlfriend” and “Desi Girl” from Dostana – ﬁnishing a sequence of songs that has brought fame and a fan following to Naach Houston over the past decade. The grand ﬁnale featured all the dancers on stage in synch dancing to One Two Three Fourget on the dance ﬂoor from Chennai Express that ended with a pose that is now legendarily known as the “Naach Hands”. The curtain call was yet another remix from the past “Paisa Yeh Paisa” from Karz, introducing us to the fabulous team of Choreographers including Anita Vyas, Karishma Mehta, Brinda Patel, Aishwarya Ravat, Twinkle Khanna and Simran Kotak and of course Mahesh Mahbubani. Choreographers who are now Naach Alumni but were helpful in creating these epic dance pieces over the last few years were also acknowledged. Within hours of the show ending, pictures and videos started appearing all over the social media. Moksh Community Arts would like to thank Navin Mediwala for still photography and Yash Singh for videography of the event, Back stage Management by Malay Vyas and the Naach Team. Houston’s Got Bollywood 2019 was sponsored by The Rungta Foundation, Larrissa and Ajay Sharma, Baylor St Luke’s Hospital, Alnoor &amp; Shelina Malick, Manyavar, Bombay Pizza, Nalini Kannan of Decor One, Nithya Venkatesan &amp; Media Partners India Herald and Radio Dabang. The show was funded by the city of Houston through the Miller Theatre Advisory Board.