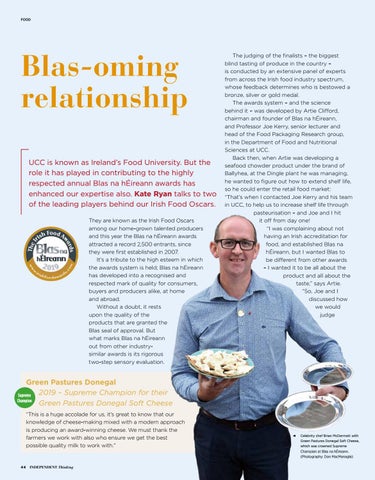 Blas-oming relationship UCC is known as Ireland’s Food University. But the role it has played in contributing to the highly respected annual Blas na hÉireann awards has enhanced our expertise also. Kate Ryan talks to two of the leading players behind our Irish Food Oscars. They are known as the Irish Food Oscars among our home-grown talented producers and this year the Blas na hÉireann awards attracted a record 2,500 entrants, since they were first established in 2007. It’s a tribute to the high esteem in which the awards system is held; Blas na hÉireann has developed into a recognised and respected mark of quality for consumers, buyers and producers alike, at home and abroad. Without a doubt, it rests upon the quality of the products that are granted the Blas seal of approval. But what marks Blas na hÉireann out from other industrysimilar awards is its rigorous two-step sensory evaluation.

The judging of the finalists – the biggest blind tasting of produce in the country – is conducted by an extensive panel of experts from across the Irish food industry spectrum, whose feedback determines who is bestowed a bronze, silver or gold medal. The awards system – and the science behind it – was developed by Artie Clifford, chairman and founder of Blas na hÉireann, and Professor Joe Kerry, senior lecturer and head of the Food Packaging Research group, in the Department of Food and Nutritional Sciences at UCC. Back then, when Artie was developing a seafood chowder product under the brand of Ballyhea, at the Dingle plant he was managing, he wanted to figure out how to extend shelf life, so he could enter the retail food market: “That’s when I contacted Joe Kerry and his team in UCC, to help us to increase shelf life through pasteurisation – and Joe and I hit it off from day one! “I was complaining about not having an Irish accreditation for food, and established Blas na hÉireann, but I wanted Blas to be different from other awards – I wanted it to be all about the product and all about the taste,” says Artie. “So, Joe and I discussed how we would judge

Green Pastures Donegal 2019 – Supreme Champion for their Supreme Champion Green Pastures Donegal Soft Cheese “This is a huge accolade for us, it’s great to know that our knowledge of cheese-making mixed with a modern approach is producing an award-winning cheese. We must thank the farmers we work with also who ensure we get the best possible quality milk to work with.” 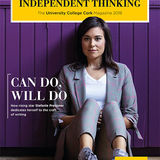