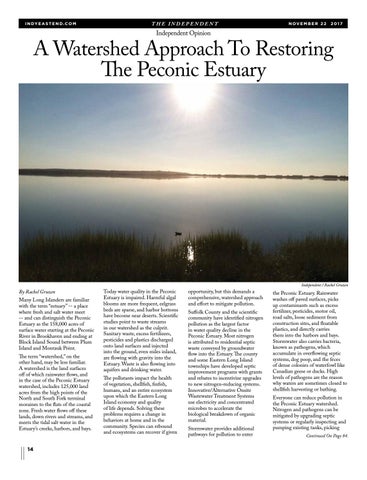 A Watershed Approach To Restoring The Peconic Estuary

Many Long Islanders are familiar with the term “estuary” -- a place where fresh and salt water meet -- and can distinguish the Peconic Estuary as the 158,000 acres of surface water starting at the Peconic River in Brookhaven and ending at Block Island Sound between Plum Island and Montauk Point. The term “watershed,” on the other hand, may be less familiar. A watershed is the land surfaces off of which rainwater flows, and in the case of the Peconic Estuary watershed, includes 125,000 land acres from the high points of the North and South Fork terminal moraines to the flats of the coastal zone. Fresh water flows off these lands, down rivers and streams, and meets the tidal salt water in the Estuary’s creeks, harbors, and bays. 14

Today water quality in the Peconic Estuary is impaired. Harmful algal blooms are more frequent, eelgrass beds are sparse, and harbor bottoms have become near deserts. Scientific studies point to waste streams in our watershed as the culprit. Sanitary waste, excess fertilizers, pesticides and plastics discharged onto land surfaces and injected into the ground, even miles inland, are flowing with gravity into the Estuary. Waste is also flowing into aquifers and drinking water. The pollutants impact the health of vegetation, shellfish, finfish, humans, and an entire ecosystem upon which the Eastern Long Island economy and quality of life depends. Solving these problems requires a change in behaviors at home and in the community. Species can rebound and ecosystems can recover if given

opportunity, but this demands a comprehensive, watershed approach and effort to mitigate pollution.

Suffolk County and the scientific community have identified nitrogen pollution as the largest factor in water quality decline in the Peconic Estuary. Most nitrogen is attributed to residential septic waste conveyed by groundwater flow into the Estuary. The county and some Eastern Long Island townships have developed septic improvement programs with grants and rebates to incentivize upgrades to new nitrogen-reducing systems. Innovative/Alternative Onsite Wastewater Treatment Systems use electricity and concentrated microbes to accelerate the biological breakdown of organic material. Stormwater provides additional pathways for pollution to enter

the Peconic Estuary. Rainwater washes off paved surfaces, picks up contaminants such as excess fertilizer, pesticides, motor oil, road salts, loose sediment from construction sites, and floatable plastics, and directly carries them into the harbors and bays. Stormwater also carries bacteria, known as pathogens, which accumulate in overflowing septic systems, dog poop, and the feces of dense colonies of waterfowl like Canadian geese or ducks. High levels of pathogens are the reason why waters are sometimes closed to shellfish harvesting or bathing. Everyone can reduce pollution in the Peconic Estuary watershed. Nitrogen and pathogens can be mitigated by upgrading septic systems or regularly inspecting and pumping existing tanks, picking 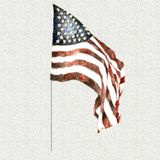