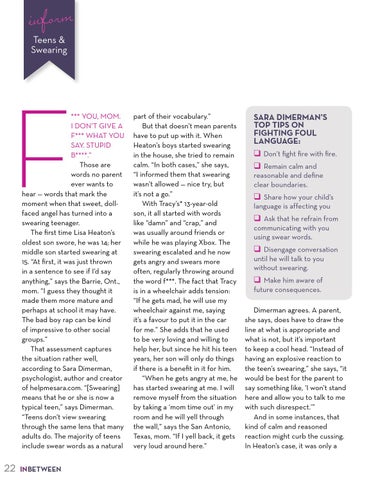 *** you, mom. I don’t give a f*** what you say. Stupid b****.” Those are words no parent ever wants to hear — words that mark the moment when that sweet, dollfaced angel has turned into a swearing teenager. The first time Lisa Heaton’s oldest son swore, he was 14; her middle son started swearing at 15. “At first, it was just thrown in a sentence to see if I’d say anything,” says the Barrie, Ont., mom. “I guess they thought it made them more mature and perhaps at school it may have. The bad boy rap can be kind of impressive to other social groups.” That assessment captures the situation rather well, according to Sara Dimerman, psychologist, author and creator of helpmesara.com. “[Swearing] means that he or she is now a typical teen,” says Dimerman. “Teens don’t view swearing through the same lens that many adults do. The majority of teens include swear words as a natural

part of their vocabulary.” But that doesn’t mean parents have to put up with it. When Heaton’s boys started swearing in the house, she tried to remain calm. “In both cases,” she says, “I informed them that swearing wasn’t allowed — nice try, but it’s not a go.” With Tracy’s* 13-year-old son, it all started with words like “damn” and “crap,” and was usually around friends or while he was playing Xbox. The swearing escalated and he now gets angry and swears more often, regularly throwing around the word f***. The fact that Tracy is in a wheelchair adds tension: “If he gets mad, he will use my wheelchair against me, saying it’s a favour to put it in the car for me.” She adds that he used to be very loving and willing to help her, but since he hit his teen years, her son will only do things if there is a benefit in it for him. “When he gets angry at me, he has started swearing at me. I will remove myself from the situation by taking a ‘mom time out’ in my room and he will yell through the wall,” says the San Antonio, Texas, mom. “If I yell back, it gets very loud around here.”

❑ Share how your child’s language is affecting you

❑ Ask that he refrain from communicating with you using swear words.

❑ Disengage conversation until he will talk to you without swearing. ❑ Make him aware of future consequences. Dimerman agrees. A parent, she says, does have to draw the line at what is appropriate and what is not, but it’s important to keep a cool head. “Instead of having an explosive reaction to the teen’s swearing,” she says, “it would be best for the parent to say something like, ‘I won’t stand here and allow you to talk to me with such disrespect.’” And in some instances, that kind of calm and reasoned reaction might curb the cussing. In Heaton’s case, it was only a

Our holiday issue is packed with fun stories crafted for every parent of a teen! Featuring stunning gift guides and getting glowing skin to coping with teens that cuss and how to deal with the holidays after divorce. Plus win a free stay in Florida! 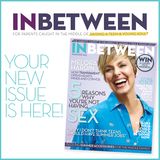