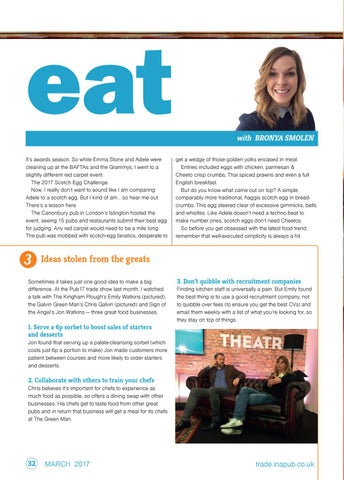 eat It’s awards season. So while Emma Stone and Adele were cleaning up at the BAFTAs and the Grammys, I went to a slightly different red carpet event. The 2017 Scotch Egg Challenge. Now, I really don’t want to sound like I am comparing Adele to a scotch egg. But I kind of am… so hear me out. There’s a lesson here. The Canonbury pub in London’s Islington hosted the event, seeing 15 pubs and restaurants submit their best egg for judging. Any red carpet would need to be a mile long. The pub was mobbed with scotch-egg fanatics, desperate to

with BRONYA SMOLEN get a wedge of those golden yolks encased in meat. Entries included eggs with chicken, parmesan &amp; Cheeto crisp crumbs, Thai spiced prawns and even a full English breakfast. But do you know what came out on top? A simple, comparably more traditional, haggis scotch egg in breadcrumbs. This egg steered clear of excessive gimmicks, bells and whistles. Like Adele doesn’t need a techno beat to make number ones, scotch eggs don’t need Cheetos. So before you get obsessed with the latest food trend, remember that well-executed simplicity is always a hit.

Ideas stolen from the greats

1. Serve a 6p sorbet to boost sales of starters and desserts

3. Don’t quibble with recruitment companies Finding kitchen staff is universally a pain. But Emily found the best thing is to use a good recruitment company, not to quibble over fees (to ensure you get the best CVs) and email them weekly with a list of what you’re looking for, so they stay on top of things.

Jon found that serving up a palate-cleansing sorbet (which costs just 6p a portion to make) Jon made customers more patient between courses and more likely to order starters and desserts.

2. Collaborate with others to train your chefs Chris believes it’s important for chefs to experience as much food as possible, so offers a dining swap with other businesses. His chefs get to taste food from other great pubs and in return that business will get a meal for its chefs at The Green Man.

In a world that increasingly focuses on the whims and wants of the millennial generation, we turn our attention to those old enough to be their grandparents. Can you keep the baby-boomers happy at the same time as appealing to your younger clientele? We also talk to a man at the centre of the Desi pub phenomenon – that’s the wave of Asian-influenced pubs opening up across the Midlands. Stir in features about cask and food, whether or not local sourcing remains important, and a pub that went viral with the greatest trick shot you ever saw and you have all the ingredients for a cracking March issue. Enjoy.