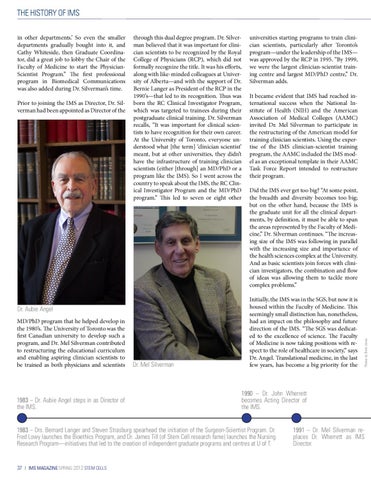 THE HISTORY OF IMS

Prior to joining the IMS as Director, Dr. Silverman had been appointed as Director of the

through this dual degree program. Dr. Silverman believed that it was important for clinician scientists to be recognized by the Royal College of Physicians (RCP), which did not formally recognize the title. It was his efforts, along with like-minded colleagues at University of Alberta—and with the support of Dr. Bernie Langer as President of the RCP in the 1990’s—that led to its recognition. Thus was born the RC Clinical Investigator Program, which was targeted to trainees during their postgraduate clinical training. Dr. Silverman recalls, “It was important for clinical scientists to have recognition for their own career. At the University of Toronto, everyone understood what [the term] ‘clinician scientist’ meant, but at other universities, they didn’t have the infrastructure of training clinician scientists (either [through] an MD/PhD or a program like the IMS). So I went across the country to speak about the IMS, the RC Clinical Investigator Program and the MD/PhD program.” This led to seven or eight other

Dr. Aubie Angel MD/PhD program that he helped develop in the 1980’s. The University of Toronto was the first Canadian university to develop such a program, and Dr. Mel Silverman contributed to restructuring the educational curriculum and enabling aspiring clinician scientists to be trained as both physicians and scientists

universities starting programs to train clinician scientists, particularly after Toronto’s program—under the leadership of the IMS— was approved by the RCP in 1995. “By 1999, we were the largest clinician-scientist training centre and largest MD/PhD centre,” Dr. Silverman adds. It became evident that IMS had reached international success when the National Institute of Health (NIH) and the American Association of Medical Colleges (AAMC) invited Dr. Mel Silverman to participate in the restructuring of the American model for training clinician scientists. Using the expertise of the IMS clinician-scientist training program, the AAMC included the IMS model as an exceptional template in their AAMC Task Force Report intended to restructure their program. Did the IMS ever get too big? “At some point, the breadth and diversity becomes too big; but on the other hand, because the IMS is the graduate unit for all the clinical departments, by definition, it must be able to span the areas represented by the Faculty of Medicine,” Dr. Silverman continues. “The increasing size of the IMS was following in parallel with the increasing size and importance of the health sciences complex at the University. And as basic scientists join forces with clinician investigators, the combination and flow of ideas was allowing them to tackle more complex problems.” Initially, the IMS was in the SGS, but now it is housed within the Faculty of Medicine. This seemingly small distinction has, nonetheless, had an impact on the philosophy and future direction of the IMS. “The SGS was dedicated to the excellence of science. The Faculty of Medicine is now taking positions with respect to the role of healthcare in society,” says Dr. Angel. Translational medicine, in the last few years, has become a big priority for the

1983 – Drs. Bernard Langer and Steven Strasburg spearhead the initiation of the Surgeon-Scientist Program. Dr. Fred Lowy launches the Bioethics Program, and Dr. James Till (of Stem Cell research fame) launches the Nursing Research Program—initiatives that led to the creation of independent graduate programs and centres at U of T.

in other departments.’ So even the smaller departments gradually bought into it, and Cathy Whiteside, then Graduate Coordinator, did a great job to lobby the Chair of the Faculty of Medicine to start the PhysicianScientist Program.” The first professional program in Biomedical Communications was also added during Dr. Silverman’s time. 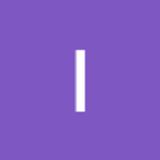 A magazine highlighting the research, students and faculty at the Institute of Medical Science at the University of Toronto. This issue's fe...

A magazine highlighting the research, students and faculty at the Institute of Medical Science at the University of Toronto. This issue's fe...