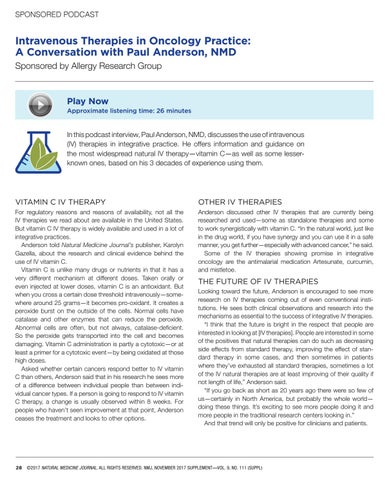 In this podcast interview, Paul Anderson, NMD, discusses the use of intravenous (IV) therapies in integrative practice. He offers information and guidance on the most widespread natural IV therapy—vitamin C—as well as some lesserknown ones, based on his 3 decades of experience using them.

For regulatory reasons and reasons of availability, not all the IV therapies we read about are available in the United States. But vitamin C IV therapy is widely available and used in a lot of integrative practices. Anderson told Natural Medicine Journal’s publisher, Karolyn Gazella, about the research and clinical evidence behind the use of IV vitamin C. Vitamin C is unlike many drugs or nutrients in that it has a very different mechanism at different doses. Taken orally or even injected at lower doses, vitamin C is an antioxidant. But when you cross a certain dose threshold intravenously—somewhere around 25 grams—it becomes pro-oxidant. It creates a peroxide burst on the outside of the cells. Normal cells have catalase and other enzymes that can reduce the peroxide. Abnormal cells are often, but not always, catalase-deficient. So the peroxide gets transported into the cell and becomes damaging. Vitamin C administration is partly a cytotoxic—or at least a primer for a cytotoxic event—by being oxidated at those high doses. Asked whether certain cancers respond better to IV vitamin C than others, Anderson said that in his research he sees more of a difference between individual people than between individual cancer types. If a person is going to respond to IV vitamin C therapy, a change is usually observed within 8 weeks. For people who haven’t seen improvement at that point, Anderson ceases the treatment and looks to other options.

Anderson discussed other IV therapies that are currently being researched and used—some as standalone therapies and some to work synergistically with vitamin C. “In the natural world, just like in the drug world, if you have synergy and you can use it in a safe manner, you get further—especially with advanced cancer,” he said. Some of the IV therapies showing promise in integrative oncology are the antimalarial medication Artesunate, curcumin, and mistletoe.

THE FUTURE OF IV THERAPIES Looking toward the future, Anderson is encouraged to see more research on IV therapies coming out of even conventional institutions. He sees both clinical observations and research into the mechanisms as essential to the success of integrative IV therapies. “I think that the future is bright in the respect that people are interested in looking at [IV therapies]. People are interested in some of the positives that natural therapies can do such as decreasing side effects from standard therapy, improving the effect of standard therapy in some cases, and then sometimes in patients where they’ve exhausted all standard therapies, sometimes a lot of the IV natural therapies are at least improving of their quality if not length of life,” Anderson said. “If you go back as short as 20 years ago there were so few of us—certainly in North America, but probably the whole world— doing these things. It’s exciting to see more people doing it and more people in the traditional research centers looking in.” And that trend will only be positive for clinicians and patients.