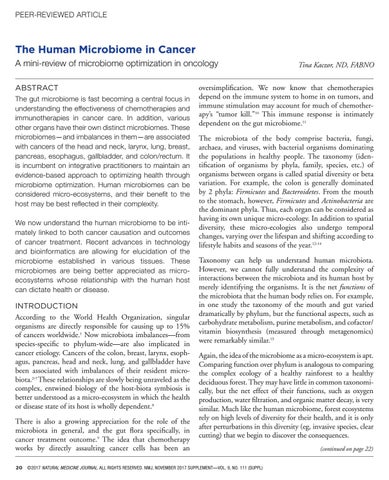 The Human Microbiome in Cancer A mini-review of microbiome optimization in oncology ABSTRACT The gut microbiome is fast becoming a central focus in understanding the effectiveness of chemotherapies and immunotherapies in cancer care. In addition, various other organs have their own distinct microbiomes. These microbiomes—and imbalances in them—are associated with cancers of the head and neck, larynx, lung, breast, pancreas, esophagus, gallbladder, and colon/rectum. It is incumbent on integrative practitioners to maintain an evidence-based approach to optimizing health through microbiome optimization. Human microbiomes can be considered micro-ecosystems, and their benefit to the host may be best reflected in their complexity. We now understand the human microbiome to be intimately linked to both cancer causation and outcomes of cancer treatment. Recent advances in technology and bioinformatics are allowing for elucidation of the microbiome established in various tissues. These microbiomes are being better appreciated as microecosystems whose relationship with the human host can dictate health or disease.

INTRODUCTION According to the World Health Organization, singular organisms are directly responsible for causing up to 15% of cancers worldwide.1 Now microbiota imbalances—from species-specific to phylum-wide—are also implicated in cancer etiology. Cancers of the colon, breast, larynx, esophagus, pancreas, head and neck, lung, and gallbladder have been associated with imbalances of their resident microbiota.2-7 These relationships are slowly being unraveled as the complex, entwined biology of the host-biota symbiosis is better understood as a micro-ecosystem in which the health or disease state of its host is wholly dependent.8 There is also a growing appreciation for the role of the microbiota in general, and the gut flora specifically, in cancer treatment outcome.9 The idea that chemotherapy works by directly assaulting cancer cells has been an

oversimplification. We now know that chemotherapies depend on the immune system to home in on tumors, and immune stimulation may account for much of chemotherapy’s “tumor kill.”10 This immune response is intimately dependent on the gut microbiome.11 The microbiota of the body comprise bacteria, fungi, archaea, and viruses, with bacterial organisms dominating the populations in healthy people. The taxonomy (identification of organisms by phyla, family, species, etc.) of organisms between organs is called spatial diversity or beta variation. For example, the colon is generally dominated by 2 phyla: Firmicutes and Bacteroidetes. From the mouth to the stomach, however, Firmicutes and Actinobacteria are the dominant phyla. Thus, each organ can be considered as having its own unique micro-ecology. In addition to spatial diversity, these micro-ecologies also undergo temporal changes, varying over the lifespan and shifting according to lifestyle habits and seasons of the year.12-14 Taxonomy can help us understand human microbiota. However, we cannot fully understand the complexity of interactions between the microbiota and its human host by merely identifying the organisms. It is the net functions of the microbiota that the human body relies on. For example, in one study the taxonomy of the mouth and gut varied dramatically by phylum, but the functional aspects, such as carbohydrate metabolism, purine metabolism, and cofactor/ vitamin biosynthesis (measured through metagenomics) were remarkably similar.15 Again, the idea of the microbiome as a micro-ecosystem is apt. Comparing function over phylum is analogous to comparing the complex ecology of a healthy rainforest to a healthy deciduous forest. They may have little in common taxonomically, but the net effect of their functions, such as oxygen production, water filtration, and organic matter decay, is very similar. Much like the human microbiome, forest ecosystems rely on high levels of diversity for their health, and it is only after perturbations in this diversity (eg, invasive species, clear cutting) that we begin to discover the consequences.