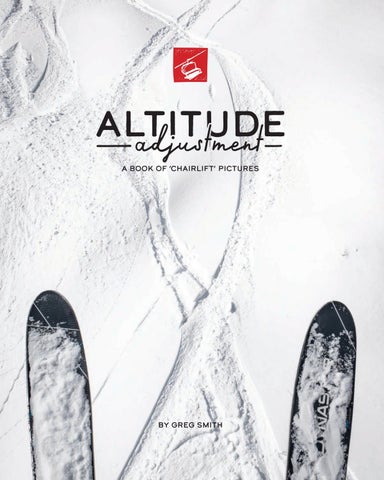 A BOOK OF ‘CHAIRLIFT’ PICTURES

A BOOK OF ‘CHAIRLIFT’ PICTURES

BY GREG SMITH Foreword by

table of CONTENTS 02 Foreword by David J. Rothman 04 Introduction: On the Ride Up 08 Fly-by Pictures 18

With or Without a Bun

80 The Party 90 The Back Story 93 Index of Photographs

foreword by DAVID J. ROTHMAN Skis hardly changed for thousands of years: two planks of wood, tapered and bent up in the front, with a sloppy attachment for the feet. Good for flat travel, not so good for ripping couloirs. Then, in the last century, scores of innovations appeared: metal edges, lamination, releasable bindings, plastic boots, snow cats, snowmaking and more. These tools changed everything. And the greatest innovation of them all was the chairlift. The single-person chairlift was invented by James Curran, an engineer for the Union Pacific Railroad, and the first two were installed on Dollar and Proctor mountains at Sun Valley for the 1936-37 season. Resort owners and the public quickly saw this was the future. Such a tremendous increase in the efficiency of going up mountains was the single greatest development that led to the tremendous popularity of sliding down them. Doppelmayr’s innovation of the detachable chair, the first of which was installed in 1981 at Breckenridge, advanced the revolution. Today in the United States, there are more than 2,500 chairlifts, from aging fixedgrip singles to detachable, eight-seat flying couches, with tens of thousands more around the world.

While there are countless published pictures of chairlifts and websites, such as Peter Landsman’s astonishing Lift Blog, that address the details of the industry, no one to my knowledge has even attempted what Greg Smith’s inspiring book accomplishes, which is a tribute to the machines that are so important to the way we live now in the mountains. When Greg was the communications strategist for Western State Colorado University, he served up thousands upon thousands of images for the institution that always seemed to come out right. In Altitude Adjustment he has, with his usual skill, struck a gusher. As Otto Schniebs, the great Austrian transplant who helped create modern American skiing, frequently would say, “Skiing is not a sport—it’s a way of life,” and Greg’s evocative photos show us a new way to think about that way of life, focusing our attention, as so much of the best photography does, on what was always right in front of our eyes. Taken mostly at Colorado’s Monarch Mountain, Telluride and Crested Butte, his focus on chairlifts—the machinery, the views, the people on them, beneath them and running them—reminds us of the obvious: There is magic in all aspects of the ski life, not just the turns. Altitude Adjustment is more than an expression of creativity; it is also an expression of gratitude, a thoughtful and new way to look at a technology that can charm the life of an entire community. Like much great photography, his pictures guide our attention to what deserves it, in this case illuminating the delight we find sliding around mountains on sticks. Like all strong artists, he encourages us to pay attention to what matters. Enjoy. And the next time you head out on a big storm day, and the bull wheel is spinning to transport you thousands of feet up a snow-choked mountain in a matter of minutes, consider just how great that is, be grateful to Greg for reminding us of it, and remember to thank your liftie. David J. Rothman, a writer and educator of poetry and prose, is the author of Living the Life: Tales from America’s Mountains and Ski Towns.

introduction ON THE RIDE UP Chairlifts give us relatively safe access to weather and terrain normal folks would otherwise avoid. In recent years, we’ve seen more skiers “earning their turns,” hiking up hills—some at resorts, others in the backcountry—for “laps” and bragging rights. But that’s not a good option for the average skier from the suburbs, nor for me. My knees are challenged enough as I glide downhill. Wearing them out before the first turn doesn&#39;t make sense to me. Don’t get me wrong. I respect those who trudge uphill for exercise, escape, lift ticket savings and cementing deep bonds with equally driven climbing partners. But they miss the random social interactions with ski bums and corporate titans in lift lines. They miss the off-beat scenes unfolding beneath moving chairs. They don’t get to know random folks on the ride up.

All this grew clearer on March 14, 2020, the last day of lift-served skiing in Colorado for a season shortened by the Covid-19 pandemic. My wife, Janet, and I spent the day riding lifts in Telluride, meeting a mix of locals and visitors on its high-speed quad chairs. We shared stories of Telluride in the 1980s and marveled at the scene. When chairs spun again through our lift stations at central Colorado’s Monarch Mountain on Thanksgiving Day, 2020, such conversations were gone. Glares at those failing to mask up replaced much of the former banter. As a party of three, one of us rode alone on Monarch’s double chairs. Much was lost. This book chronicles the vehicle for such meetings. While random encounters have returned as the pandemic becomes endemic, what we never lost—except when Gov. Polis shut down all lifts that March evening—was the way cables and chairs give the average snowplowing schmo and the terrain park wild man ready and equal access to frozen fun in a challenging environment. Even masked and segregated by “party,” we still had the colorful parade of ski and board bottoms soaring over us. We could still marvel at the patterns of lifts snaking up the hill. As we soared upward, we still had a front-row seat to hot-dogger antics, crashes and family dramas on the snow. While I call these “chairlift pictures,” they look a bit more widely, documenting skiing and riding from the perspective most winter sports enthusiasts experience it: in bounds, via a chairlift ride. These days I work with a little Sony camera in a waist pack, ready for each cruise up the hill—and an occasional stolen moment on the way down. The pictures that follow offer my take on the mountains’ beauty and awesome presence, their extreme weather, the lifties’ dedication amid their crazy culture, the parties, wild folks catching air under the lifts, bright colors against stark-white slopes and stunning blue skies, and the sheer joy of surfing gravity in the winter landscape.

fly by PICTURES When I was a child, we paid to ride a chairlift and look across hazy hills during a summer visit to New Hampshire. Such scenic lifts and trams dot the world’s mountains, with one summer-only “sky ride” just a mile or so from Monarch Mountain, where more than 50 years later, I dangle from wires much of the winter. Folks pay to ride without a clear destination because a chairlift gives you a unique perspective on the world, tinged with at least some fear as you dangle your legs above a moving landscape. Add in skiers and snowboard riders beneath your lift, negotiating what is often the mountain’s steepest terrain, and you’re in the proverbial catbird’s seat. You see it all, from elegant free-heelers cutting fresh lines to parents coaxing reluctant kids down rocky faces. Low winter sunlight brings out the textures in freshly tracked snow. Skiers’ and riders’ colorful clothing and equipment glow in the open shade when the sun passes behind the peaks in late afternoon.

On the hill myself, I look up at a passing parade of chairlift riders and their gear, set against the day’s weather. Reds and yellows pop against January-blue skies. Snowboards tapped on footrests sprinkle sparkling ice crystals in the February sun. That’s why I call these “fly bys.” In one sense, they’re like the real estate advertising pictures I was assigned at my first newspaper job. “Just roll down the car window, shoot a picture and roll to the next house,” my boss said. But I hope you’ll find them something more, aspiring to Henri Cartier Bresson’s concept of the “Decisive Moment.” Preparation and luck combine as I try to capture these brief slices of time and life, moving steadily up as the action goes down. I seek synchronicity, when the action, emotion, light, snow conditions and the chair’s passing align to make a cool picture.

with or without A BUN Could skiing and board riding even exist without hot dogs? (NOT the relatively bland meat byproducts stuffed in a sausage casing.) I’m pretty sure the first Laplander to point his skis downhill and survive made his second gravity slide to show a buddy what he could do. I suspect a pole came next. I saw a film once showing a fur trapper in Siberia pushing himself and his skis forward with a single pole taller than he. But I wonder: Which came first, thrusting a pole between the legs to move forward or waving it in the air to celebrate a cool turn?

That sentiment thrives on every ski hill I’ve visited across 50 years. Today’s “free skiing,” “slope style,” “park and pipe” and even “-cross” events have roots in the “hot dog” competitions of the 1980s. This need for more speed, style and air not only keeps the Ski Patrol and orthopedic surgeons busy, it also prompts feats that are darned entertaining to watch. Hot dogs know this. And they’re drawn to perform for an overhead audience.

Still, my fly-by principle applies: Your chair’s place on the moving cable governs whether you see a feat or just hear about it. One day I dangled five minutes on a stopped lift, watching two crazies crawl into the trees above a 20-foot rock face and summon their courage. My chair finally moved over the ridge, blocking my view. Then I heard the oohs and ahs as one of the pair landed a backflip.

As a photographer in motion, staying ready and planning for a lucky convergence are the best I can do. Once in a while, a Decisive Moment occurs when I am there—and focused. But I must admit to missing more great moments than I capture. It’s the nature of the beast. These pictures salute every doer of bold deeds under my chair. May your buns never unravel in midair! And may you land safely—unless your crash is truly spectacular, about 30 feet uphill from my chair, gently backlit, exploding in a cloud of powder only after I have the right lens mounted and my exposure set. Let’s be careful out there (but still have fun and show it!).

“Altitude Adjustment is more than an expression of creativity; it is also an expression of gratitude, a thoughtful and new way to look at a technology that can charm the life of an entire community.” 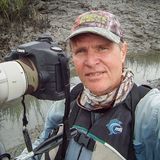