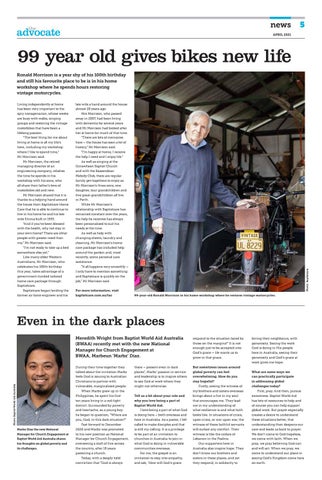 99 year old gives bikes new life Ronald Morrison is a year shy of his 100th birthday and still his favourite place to be is in his home workshop where he spends hours restoring vintage motorcycles. late wife a hand around the house almost 20 years ago. Mrs Morrison, who passed away in 2007, had been living with dementia for several years and Mr Morrison had looked after her at home for much of that time. “There are lots of memories here – the house has seen a lot of history,” Mr Morrison said. “I’m happy at home; I receive the help I need and I enjoy life.” As well as singing at the Girrawheen Baptist Church and with the Bassendean Melody Club, there are regular family get-togethers to enjoy as Mr Morrison’s three sons, one daughter, four grandchildren and five great-grandchildren all live in Perth. While Mr Morrison’s relationship with Baptistcare has remained constant over the years, the help he receives has always been personalised to suit his needs at the time. As well as help with changing sheets, laundry and cleaning, Mr Morrison’s home care package has included help around the garden and, most recently, some personal care assistance. “It all happens very smoothly – I only have to mention something and Baptistcare is quickly on the job,” Mr Morrison said. For more information, visit baptistcare.com.au/tac

Living independently at home has been very important to the spry nonagenarian, whose weeks are busy with walks, singing groups and restoring the vintage motorbikes that have been a lifelong passion. “The best thing for me about living at home is all my life’s here, including my workshop where I like to spend time,” Mr Morrison said. Mr Morrison, the retired managing director of an engineering company, relishes the time he spends in his workshop with his sons, who all share their father’s love of motorbikes old and new. Mr Morrison shared that it is thanks to a helping hand around the house from Baptistcare Home Care that he is able to continue to live in his home he and his late wife Emma built in 1953. “And if you’ve been blessed with the health, why not stay in your own home? There are other people with greater need than me,” Mr Morrison said. “I’m not ready to take up a bed somewhere else yet.” Like many older Western Australians, Mr Morrison, who celebrates his 100th birthday this year, takes advantage of a government-funded tailored home care package through Baptistcare. Baptistcare began lending the former air force engineer and his

99-year-old Ronald Morrison in his home workshop where he restores vintage motorcycles.

Even in the dark places

Marbz Diaz the new National Manager for Church Engagement at Baptist World Aid Australia shares his thoughts on global poverty and its challenges.

respond to the situation faced by those on the margins?’ It is not enough just to be accepted into God’s grace – He wants us to grow in that grace.

During their time together they talked about the invitation Marbz feels God is issuing to Australian Christians to partner with vulnerable, marginalised people. When Marbz grew up in the Philippines, he spent his first ten years living in a red-light district. Surrounded by poverty and heartache, as a young boy he began to question, “Where are you, God, in this dark situation?” Fast forward to December 2020 and Marbz was promoted to his new position as National Manager for Church Engagement, overseeing a staff of five across the country, after 18 years pastoring a church. Today, with a deeply held conviction that “God is always

But sometimes issues around global poverty can feel overwhelming. How do you stay hopeful? Firstly, seeing the witness of my brothers and sisters overseas brings about a fire in my soul that encourages me. They lead me in my understanding of what resilience is and what faith looks like. In situations of crisis, upon crisis, or war upon war, the witness of these faithful servants will outlast any conflict. Their witness is like the cedars of Lebanon in the Psalms. Our supporters here in Australia also inspire hope. They don’t know our brothers and sisters in these places, and yet they respond, in solidarity to

there – present even in dark places”, Marbz’ passion in service and leadership is to inspire others to see God at work where they might not otherwise. Tell us a bit about your role and why you love being a part of Baptist World Aid. I love being a part of what God is doing here – both overseas and here in Australia. As a pastor, I felt called to make disciples and that is still my calling. It is a privilege to be part of an invitation to churches in Australia to join in what God is doing in vulnerable communities overseas. For me, the gospel is an invitation to step into empathy, and ask, ‘How will God’s grace

loving their neighbours, with generosity. Seeing the work God is doing in His people here in Australia, seeing their generosity and God’s grace at work gives me hope. What are some ways we can practically participate in addressing global challenges today? First, pray. And then, pursue awareness. Baptist World Aid has lots of resources to help and of course you can help support global work. But prayer especially creates a desire to understand these situations better, that understanding then deepens our care and leads us back to prayer. We don’t come to God hopeless, we come with faith. When we pray, we pray believing God can and will act. When we pray, we come to understand our place in seeing God’s Kingdom come here on earth.

The Advocate is the source that Christians across Western Australia turn to each month for news, information, comment and entertainment.