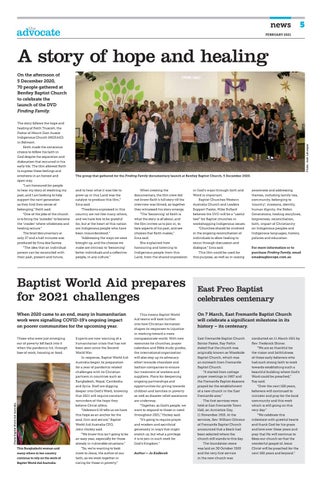 A story of hope and healing

The story follows the hope and healing of Keith Truscott, the Pastor of Mount Zion Aussie Indigenous Church (MOZAIC) in Belmont. Keith made the conscious choice to follow his faith in God despite the separation and dislocation that occurred in his early life. The film allowed Keith to express these feelings and emotions in an honest and open way. “I am honoured for people to hear my story of resolving my past, and I am looking to help support the next generation as they find their sense of belonging,” Keith said. “One of the jobs of the church is to bring the ‘outsider’ to become the ‘insider’ where wholeness and healing occurs.” The brief documentary at only 27 and a half minutes was produced by Ema dos Santos. “The idea that an individual person can be reconciled with their past, present and future,

On the afternoon of 5 December 2020, 70 people gathered at Bentley Baptist Church to celebrate the launch of the DVD Finding Family.

The group that gathered for the Finding Family documentary launch at Bentley Baptist Church, 5 December 2020.

and to hear what it was like to grow up in this Land was the catalyst to produce this film,” Ema said. “Freedoms expressed in this country are not like many others, and we have lots to be grateful for, but at the heart of this nation are Indigenous people who have been misunderstood.” “Addressing the ways we were brought up, and the choices we make are intrinsic to ‘becoming’ better individuals and a collective people, in any culture.”

When creating the documentary, the film crew did not know Keith’s full story till the interview was filmed, so together they witnessed his story emerge. “The ‘becoming’ of Keith is what the story is all about, and the film invites us to join in, to face aspects of his past, and see choices that Keith makes,” Ema said. She explained how honouring and listening to Indigenous people from this Land, from the shared expression

in God’s ways through faith and Word is important. Baptist Churches Western Australia Church and Leaders Support Pastor, Mike Bullard believes the DVD will be a “useful tool” for Baptist churches in workshopping Indigenous issues. “Churches should be involved in the ongoing reconciliation of individuals to allow healing to occur through discussion and dialogue,” Ema said. This film could be used for this purpose, as well as in raising

When 2020 came to an end, many in humanitarian work were signalling COVID-19’s ongoing impact on poorer communities for the upcoming year.

On 7 March, East Fremantle Baptist Church will celebrate a significant milestone in its history – its centenary.

Those who were just emerging out of poverty fell back into it when the pandemic hit, through lose of work, housing or food.

This Bangladeshi woman and many others in her country continue to rely on the work of Baptist World Aid Australia.

Experts are now warning of a humanitarian crisis that has not been seen since the Second World War. In response, Baptist World Aid Australia began its preparation for a year of pandemic related challenges with its Christian partners in countries such as Bangladesh, Nepal, Cambodia and Syria. Staff are digging deeper into God’s Word, knowing that 2021 will require constant reminders of the hope they believe Christ offers. “Hebrews 6:19 tells us we have this hope as an anchor for the soul, firm and secure,” Baptist World Aid Australia CEO, John Hickey said. “We know this isn’t going to be an easy year, especially for those already in vulnerable situations.” “So, we’re wanting to look more to Jesus, the author of our faith, as we work together in caring for those in poverty.”

This means Baptist World Aid teams will look further into how Christian formation shapes its responses to injustice in working toward a more compassionate world. With new resources for churches, prayer calendars and Bible study guides, the international organisation will also step up its advocacy effort towards chocolate and fashion companies to ensure fair treatment of workers and suppliers. Plans for deepening ongoing partnerships and opportunities for giving towards children and families in poverty as well as disaster relief assistance are underway. “Together, as God’s people, we want to respond to those in need throughout 2021,” Hickey said. “It’s going to require prayer and wisdom and sacrificial generosity in ways that might stretch us, but what a privilege it is to join in such work for God’s Kingdom.” Author – Jo Kadlecek

conducted on 11 March 1921 by Rev. Frederick Shiner. “We are so thankful for the vision and faithfulness of those early believers who had such strong faith to work towards establishing such a beautiful building where God’s Word could be preached,” Ray said. “Over the next 100 years, believers will continued to minister and pray for the local community and this work which is still going on this very day.” “We celebrate this milestone with grateful hearts and thank God for his grace and love over these years and pray that He will continue to bless our church so that the wonderful gospel of Jesus Christ will be preached for the next 100 years and beyond.”

The Advocate is the source that Christians across Western Australia turn to each month for news, information, comment and entertainment.