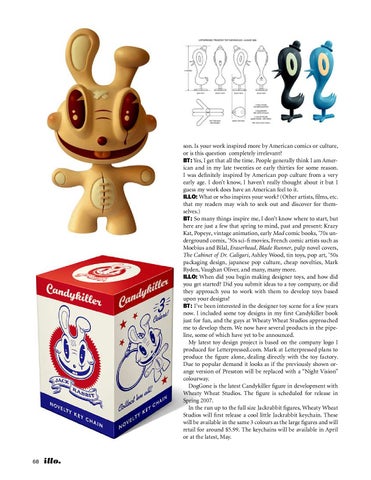 son. Is your work inspired more by American comics or culture, or is this question completely irrelevant? BT: Yes, I get that all the time. People generally think I am American and in my late twenties or early thirties for some reason. I was definitely inspired by American pop culture from a very early age. I don’t know, I haven’t really thought about it but I guess my work does have an American feel to it. ILLO: What or who inspires your work? (Other artists, films, etc. that my readers may wish to seek out and discover for themselves.) BT: So many things inspire me, I don’t know where to start, but here are just a few that spring to mind, past and present: Krazy Kat, Popeye, vintage animation, early Mad comic books, ’70s underground comix, ’50s sci-fi movies, French comic artists such as Moebius and Bilal, Eraserhead, Blade Runner, pulp novel covers, The Cabinet of Dr. Caligari, Ashley Wood, tin toys, pop art, ’50s packaging design, japanese pop culture, cheap novelties, Mark Ryden, Vaughan Oliver, and many, many more. ILLO: When did you begin making designer toys, and how did you get started? Did you submit ideas to a toy company, or did they approach you to work with them to develop toys based upon your designs? BT: I’ve been interested in the designer toy scene for a few years now. I included some toy designs in my first Candykiller book just for fun, and the guys at Wheaty Wheat Studios approached me to develop them. We now have several products in the pipeline, some of which have yet to be announced. My latest toy design project is based on the company logo I produced for Letterpressed.com. Mark at Letterpressed plans to produce the figure alone, dealing directly with the toy factory. Due to popular demand it looks as if the previously shown orange version of Presston will be replaced with a “Night Vision” colourway. DogGone is the latest Candykiller figure in development with Wheaty Wheat Studios. The figure is scheduled for release in Spring 2007. In the run up to the full size Jackrabbit figures, Wheaty Wheat Studios will first release a cool little Jackrabbit keychain. These will be available in the same 3 colours as the large figures and will retail for around $5.99. The keychains will be available in April or at the latest, May. 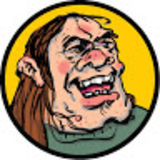 ILLO #1 - The magazine for contemporary illustrators. This issue features the work of Mitch O'Connell, Mark Shultz, Nathan Jurevicius, and B...

ILLO #1 - The magazine for contemporary illustrators. This issue features the work of Mitch O'Connell, Mark Shultz, Nathan Jurevicius, and B...