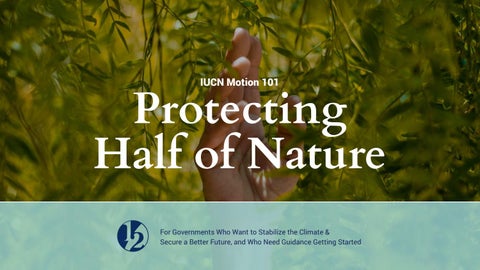 Protecting Half of Nature IUCN Motion 101

For Governments Who Want to Stabilize the Climate &amp; Secure a Better Future, and Who Need Guidance Getting Started

Wild Nature is a pre-existing, globally available resource that can be reimagined to effectively and efficiently address climate change and economic development.

Save money by better utilizing pre-existing green infrastructure to address climate change, flooding, food production, etc. Gain support by meeting the demands of multiple stakeholders at once. Protect the future by leaving in place and restoring the wildlands that are at the foundation of human health, well-being, and climate stability. 5

This September you have the opportunity to set the course for a better future by voting for Motion 101 at the IUCN World Conservation Congress.

When approved, Motion 101 will make setting aside Half to protect Earth the official IUCN recommendation to the United Nations Convention on Biological Diversity.

WHY WOULD YOU CONSIDER ENDORSING PROTECTING HALF? 7

Wild nature is our best ally in the climate emergency.

Protecting and restoring nature is good for the economy.

predicts that nearly 400 million new jobs will be created by 2030 to protect nature, reduce economic inefficiencies, and restore naturebased solutions. 10

Protecting Half of nature is good for people.

High levels of biodiversity and intact nature are top predictors for the success and security of small landholders and subsistence communities. These factors also have a positive benefit on urban areas where they can help reduce flooding, mitigated disease spread, and purify the water supply. 11

Not necessarily regionally Protecting Half is the global

scientific target, but it does

and climate mitigation than

not need to be achieved in

others. As a global community

every region or country. Some

we must work to protect and

The Case for Half

BY PROTECTING HALF OF EARTH’S LAND AND SEAS WE SECURE THE CORNERSTONE OF A SUSTAINABLE AND SURVIVABLE FUTURE. The science is as clear on protecting Half as it is on carbon emissions. We need Half of Earth’s nature intact to survive. 13

PROTECTING HALF and 30x30

World leaders adopted the latter while

temperature rise under 2 Degrees (the politically feasible target) and 1.5 Degrees (the science-backed target).

MOTION 101 RECOGNIZES INDIGENOUS LEADERSHIP IN THE PROTECTION OF EARTH’S BIODIVERSITY and wild areas and supports the full rights of Indigenous Peoples to their traditional lands and lifeways. 15

Your vote this September will help decide humanity’s future. Together we have the opportunity to move toward a nature positive, people positive present and future. Consider voting for the science-based recommendation and a healthy planet by supporting Motion 101. 18

For governments who want to stabilize the climate & secure a better future, and who need guidance getting started. Learn more: www.wild.org/motion-101 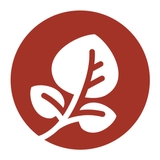