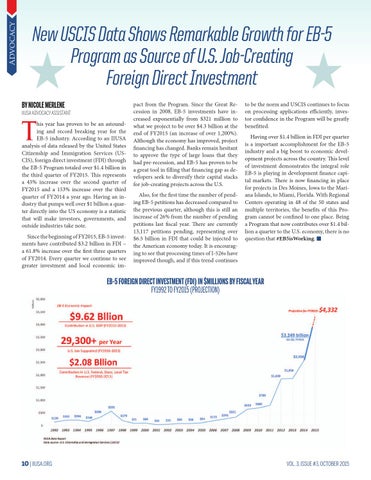 his year has proven to be an astounding and record breaking year for the EB-5 industry. According to an IIUSA analysis of data released by the United States Citizenship and Immigration Services (USCIS), foreign direct investment (FDI) through the EB-5 Program totaled over $1.4 billion in the third quarter of FY2015. This represents a 45% increase over the second quarter of FY2015 and a 153% increase over the third quarter of FY2014 a year ago. Having an industry that pumps well over $1 billion a quarter directly into the US economy is a statistic that will make investors, governments, and outside industries take note. Since the beginning of FY2015, EB-5 investments have contributed $3.2 billion in FDI â&#x20AC;&#x201C; a 61.8% increase over the first three quarters of FY2014. Every quarter we continue to see greater investment and local economic im-

pact from the Program. Since the Great Recession in 2008, EB-5 investments have increased exponentially from $321 million to what we project to be over $4.3 billion at the end of FY2015 (an increase of over 1,200%). Although the economy has improved, project financing has changed. Banks remain hesitant to approve the type of large loans that they had pre-recession, and EB-5 has proven to be a great tool in filling that financing gap as developers seek to diversify their capital stacks for job-creating projects across the U.S. Also, for the first time the number of pending EB-5 petitions has decreased compared to the previous quarter, although this is still an increase of 26% from the number of pending petitions last fiscal year. There are currently 13,117 petitions pending, representing over $6.5 billion in FDI that could be injected to the American economy today. It is encouraging to see that processing times of I-526s have improved though, and if this trend continues

to be the norm and USCIS continues to focus on processing applications efficiently, investor confidence in the Program will be greatly benefitted. Having over $1.4 billion in FDI per quarter is a important accomplishment for the EB-5 industry and a big boost to economic development projects across the country. This level of investment demonstrates the integral role EB-5 is playing in development finance capital markets. There is now financing in place for projects in Des Moines, Iowa to the Mariana Islands, to Miami, Florida. With Regional Centers operating in 48 of the 50 states and multiple territories, the benefits of this Program cannot be confined to one place. Being a Program that now contributes over $1.4 billion a quarter to the U.S. economy, there is no question that #EB5isWorking.