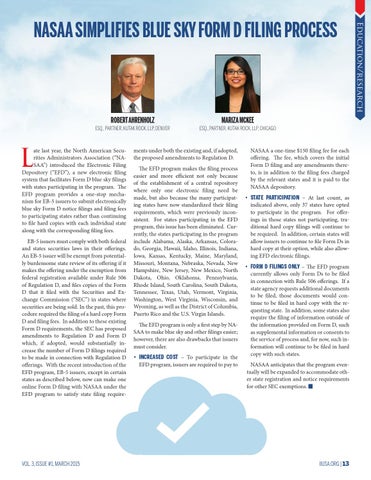 ate last year, the North American Securities Administrators Association (“NASAA”) introduced the Electronic Filing Depository (“EFD”), a new electronic filing system that facilitates Form D blue sky filings with states participating in the program. The EFD program provides a one-stop mechanism for EB-5 issuers to submit electronically blue sky Form D notice filings and filing fees to participating states rather than continuing to file hard copies with each individual state along with the corresponding filing fees. EB-5 issuers must comply with both federal and states securities laws in their offerings. An EB-5 issuer will be exempt from potentially burdensome state review of its offering if it makes the offering under the exemption from federal registration available under Rule 506 of Regulation D, and files copies of the Form D that it filed with the Securities and Exchange Commission (“SEC”) in states where securities are being sold. In the past, this procedure required the filing of a hard copy Form D and filing fees. In addition to these existing Form D requirements, the SEC has proposed amendments to Regulation D and Form D which, if adopted, would substantially increase the number of Form D filings required to be made in connection with Regulation D offerings. With the recent introduction of the EFD program, EB-5 issuers, except in certain states as described below, now can make one online Form D filing with NASAA under the EFD program to satisfy state filing require-

ments under both the existing and, if adopted, the proposed amendments to Regulation D. The EFD program makes the filing process easier and more efficient not only because of the establishment of a central repository where only one electronic filing need be made, but also because the many participating states have now standardized their filing requirements, which were previously inconsistent. For states participating in the EFD program, this issue has been eliminated. Currently, the states participating in the program include Alabama, Alaska, Arkansas, Colorado, Georgia, Hawaii, Idaho, Illinois, Indiana, Iowa, Kansas, Kentucky, Maine, Maryland, Missouri, Montana, Nebraska, Nevada, New Hampshire, New Jersey, New Mexico, North Dakota, Ohio, Oklahoma, Pennsylvania, Rhode Island, South Carolina, South Dakota, Tennessee, Texas, Utah, Vermont, Virginia, Washington, West Virginia, Wisconsin, and Wyoming, as well as the District of Columbia, Puerto Rico and the U.S. Virgin Islands. The EFD program is only a first step by NASAA to make blue sky and other filings easier; however, there are also drawbacks that issuers must consider.

• INCREASED COST – To participate in the EFD program, issuers are required to pay to

NASAA a one-time $150 filing fee for each offering. The fee, which covers the initial Form D filing and any amendments thereto, is in addition to the filing fees charged by the relevant states and it is paid to the NASAA depository.

• STATE PARTICIPATION – At last count, as

indicated above, only 37 states have opted to participate in the program. For offerings in those states not participating, traditional hard copy filings will continue to be required. In addition, certain states will allow issuers to continue to file Form Ds in hard copy at their option, while also allowing EFD electronic filings.

NASAA anticipates that the program eventually will be expanded to accommodate other state registration and notice requirements for other SEC exemptions. 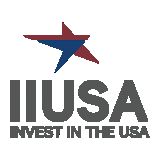