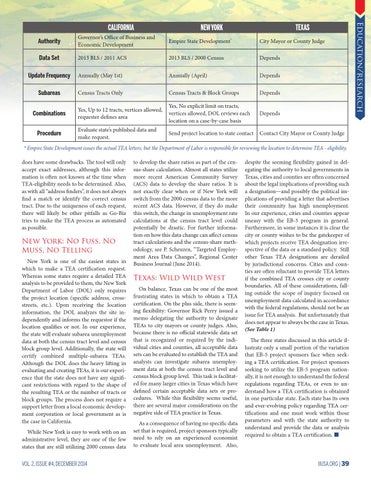 Yes, No explicit limit on tracts, vertices allowed, DOL reviews each location on a case-by-case basis

* Empire State Development issues the actual TEA letters, but the Department of Labor is responsible for reviewing the location to determine TEA - eligibility.

does have some drawbacks. The tool will only accept exact addresses, although this information is often not known at the time when TEA-eligibility needs to be determined. Also, as with all “address finders”, it does not always find a match or identify the correct census tract. Due to the uniqueness of each request, there will likely be other pitfalls as Go-Biz tries to make the TEA process as automated as possible.

New York: No Fuss, No Muss, No Telling New York is one of the easiest states in which to make a TEA certification request. Whereas some states require a detailed TEA analysis to be provided to them, the New York Department of Labor (DOL) only requires the project location (specific address, crossstreets, etc.). Upon receiving the location information, the DOL analyzes the site independently and informs the requestor if the location qualifies or not. In our experience, the state will evaluate subarea unemployment data at both the census tract level and census block group level. Additionally, the state will certify combined multiple-subarea TEAs. Although the DOL does the heavy lifting in evaluating and creating TEAs, it is our experience that the state does not have any significant restrictions with regard to the shape of the resulting TEA or the number of tracts or block groups. The process does not require a support letter from a local economic development corporation or local government as is the case in California. While New York is easy to work with on an administrative level, they are one of the few states that are still utilizing 2000 census data

to develop the share ratios as part of the census-share calculation. Almost all states utilize more recent American Community Survey (ACS) data to develop the share ratios. It is not exactly clear when or if New York will switch from the 2000 census data to the more recent ACS data. However, if they do make this switch, the change in unemployment rate calculations at the census tract level could potentially be drastic. For further information on how this data change can affect census tract calculations and the census-share methodology, see P. Scheuren, “Targeted Employment Area Data Changes”, Regional Center Business Journal (June 2014).

Texas: Wild Wild West On balance, Texas can be one of the most frustrating states in which to obtain a TEA certification. On the plus side, there is seeming flexibility: Governor Rick Perry issued a memo delegating the authority to designate TEAs to city mayors or county judges. Also, because there is no official statewide data set that is recognized or required by the individual cities and counties, all acceptable data sets can be evaluated to establish the TEA and analysts can investigate subarea unemployment data at both the census tract level and census block group level. This task is facilitated for many larger cities in Texas which have defined certain acceptable data sets or procedures. While this flexibility seems useful, there are several major considerations on the negative side of TEA practice in Texas. As a consequence of having no specific data set that is required, project sponsors typically need to rely on an experienced economist to evaluate local area unemployment. Also,

despite the seeming flexibility gained in delegating the authority to local governments in Texas, cities and counties are often concerned about the legal implications of providing such a designation—and possibly the political implications of providing a letter that advertises their community has high unemployment. In our experience, cities and counties appear uneasy with the EB-5 program in general. Furthermore, in some instances it is clear the city or county wishes to be the gatekeeper of which projects receive TEA designation irrespective of the data or a standard policy. Still other Texas TEA designations are derailed by jurisdictional concerns. Cities and counties are often reluctant to provide TEA letters if the combined TEA crosses city or county boundaries. All of these considerations, falling outside the scope of inquiry focused on unemployment data calculated in accordance with the federal regulations, should not be an issue for TEA analysis. But unfortunately that does not appear to always be the case in Texas. (See Table 1) The three states discussed in this article illustrate only a small portion of the variation that EB-5 project sponsors face when seeking a TEA certification. For project sponsors seeking to utilize the EB-5 program nationally, it is not enough to understand the federal regulations regarding TEAs, or even to understand how a TEA certification is obtained in one particular state. Each state has its own and ever-evolving policy regarding TEA certifications and one must work within those parameters and with the state authority to understand and provide the data or analysis required to obtain a TEA certification. ■