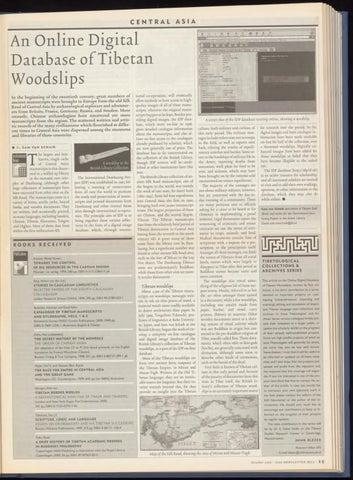 he largest and bestknown, single cache of Central Asian manuscripts is that discov­ JUL * * ■ ered in a walled-up library in the monastic cave com­ plex of Dunhuang (although other large collections of manuscripts have been excavated from other sites on the Silk Road). The manuscripts come in a variety of forms, scrolls, pothis, bound books, and wooden documents. They are written, and occasionally printed, in many languages, including Sanskrit, Chinese, Tibetan, Khotanese, Tangut, and Uighur. Most of them date from within the first millennium AD.

The International Dunhuang Pro­ ject (IDP) was established in 1993 fol­ lowing a meeting of conservators from all over the world to promote the study and preservation of manu­ scripts and printed documents from Dunhuang and other Central Asian sites through international co-opera­ tion. The principle aim of IDP is to bring together these various collec­ tions in the form of a digital image database, which, through interna-

tional co-operation, will eventually allow anybody to have access to highquality images of all of these manuscripts, wherever the original manuscripts happen to be kept. Besides pro­ viding digital images, the IDP database, which went on-line in 1998, gives detailed catalogue information about the manuscripts, and also al­ lows on-line access to the catalogues already produced by scholars, which are now generally out o f print. The database has so far concentrated on the collection of the British Library, though IDP centres will be estab­ lished at other institutions later this year. The British Library collection of an­ cient Silk Road manuscripts, one of the largest in the world, was mainly the work of one man, Sir Aurel Stein (1862-1943). Stein led four expeditions into Central Asia, the first in 1900, bringing back over 30,000 manuscript items. The largest proportion of these are Chinese, and the second largest, Tibetan. The Tibetan manuscripts date from the relatively brief period of Tibetan domination in Central Asia lasting from the seventh to the ninth century AD. A great many of these came from the library cave in Dun­ huang, but a significant number was found at other ancient Silk Road sites, such as the fort of Miran in the Lop Nor desert. The Dunhuang Tibetan texts are predominantly Buddhist, while those from other sites are most­ ly secular documents.

Tibetan woodslips About 2,300 of the Tibetan m anu­ scripts are woodslips, messages writ­ ten in ink on thin pieces of wood, a material much more readily available in desert settlements than paper. In July 1999, Tsuguhito Takeuchi, pro­ fessor of linguistics at Kobe Universi­ ty, Japan, and Sam van Schaik at the British Library, began the work of cre­ ating a complete on-line catalogue and digital image database of the British Library’s collection of Tibetan woodslips, as a part of the IDP on-line database. Most o f the Tibetan woodslips are from two ancient forts, outposts of the Tibetan Empire, in Miran and Mazar-Tagh. Written in the Old Ti­ betan language, they are an invalu­ able source for linguists. But their in­ terest extends beyond this, for they provide an insight into the Tibetan

A screen shot o f the IDP database running online, showing a woodslip for research into the period. So far, culture, both military and civilian, of digital images and basic catalogue in­ this early period. The military mes­ formation have been made available sages include orders sent out to troops on-line for half of the collection, over in the field, as well as reports sent a thousand woodslips. Digitally en­ back, relating the results of expedi­ hanced images have been added for tionary marches and battles. Some at­ those woodslips so faded that they test to the hardships of military life in have become illegible to the naked the desert, reporting deaths from eye. starvation, with pleas for food to be The IDP database (http://idp.bl.uk) sent, and sickness, which may have is an active resource for scholarship, been brought on by the extreme cold and all interested scholars are invited encountered on winter expeditions. to visit and to add their own readings, The majority of the messages are opinions, or other information to the not about military subjects, however, database, which they may also do but are concerned with the day-towhile online. ■ day running of a community. There are many petitions sent to officials Sam van Schaik specializes in Tibetan Bud­ asking for a cause to be heard or for dhism and works for the International Dun­ clemency in implementing a penal huang Project at the British Library. sentence. Legal documents report the Email: sam.vanschaik@bl.uk sentencing of criminals, and minor contracts set out the terms of com­ merce in crops, animals, and land. Medical documents contain lists of symptoms with a request for a pre­ scription, or the prescription itself Amongst all these messages, one finds the names of Tibetans from all social TIBETOLOGICAL levels, names which were largely to COLLECTIONS &amp; disappear in Tibet after this period as ARCHIVES SERIES Buddhist names became more and more common. This article on the Online Digital Database The woodslips also reveal some­ of Tibetan Woodslipts, written by Sam van thing of the religious life of these out­ Schaik, is the third contribution to a series post towns. Monks, referred to as ban devoted to important projects on cata­ dhe, are often amongst those named loguing, &#39;computerization&#39; (inputting and in a document, while a few woodslips, scanning), editing, and translation of impor­ including one amulet made from tant Tibetan language text-collections and paper, leather, and wood, carry archives. In these Tibetological and Ar­ prayers, dharams or mantras. Other chives Series various colleagues briefly pre­ wooden documents attest to a thriv­ sent their initiatives to a larger public, or ing system of ritual activity which update the scholarly world on the progress was not Buddhist in origin but con­ nected to the pre-Buddhist religion of of their already well-established projects. Some are high-profile projects, of which at Tibet, usually called Bon. These docu­ least Tibetologists will generally be aware, ments, which often refer to Bon gods yet some may also be less well known. (bon Iba), are generally concerned with Nevertheless, I trust that it will be useful to divination, although some seem to be informed or updated on all these initia­ describe other kinds of ceremonies, tives and 1also hope that the projects pre­ such as the burial of the dead. sented will profit from the exposure and Very little is known of Tibetan cul­ the response that this coverage will engen­ ture in this early period and, because der. If you are interested in any of the pro­ of the paucity of documents from this jects described, feel free to contact the au­ time in Tibet itself, the British Li brary’s collection of Tibetan w o o d -j thor of the article. In case you would like ! slips is an extremely important source | to introduce your own (planned) work in

the field, please contact the editors of the HAS Newsletter or the author of this in­ troduction. We should very much like to encourage our contributors to keep us in­

formed on the progress of their projects

by regular updates. The next contribution in this series will be by Dr E. Gene Smith on the Tibetan Studies Research Center in Cambridge.