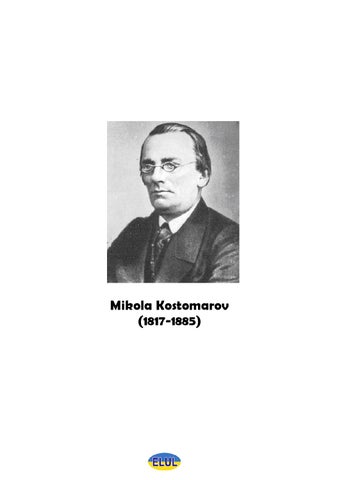 Mikola Kostomarov (1817-1885) Although he considered his poems and two historical dramas as “sins of his youth,” Kostomariv nevertheless gained for himself a respectable niche on the roster of Ukrainian poetic literature. As a professor of history in the universities of Kiev and St. Petersburg, he established himself as one of the foremost Slavic scholars. His historical novels, written chiefly in Russian, were the artistic result of his professional pursuits. Under the influence of Hohol’s “Ukrainian” stories and Maximovich’s folklore collections, he became converted to the Ukrainian language and sought Ukrainian themes for his literary productions. Compared to his prose works, his verse is of minor significance, yet important enough to reveal him as an articulate poet of freedom. A staunch Slavophil, Kostomarov was the founder and one of the most influential members of the Ukrainian political and cultural Saints Cyril and Methodius Brotherhood which fostered the Slavic movement of Enlightenment and supported the idea of a federation of all the Slavic peoples with equal and complete freedom in it for all the nations, including Ukraine. For his activity in that organization he was arrested (together with Shevchenko, Kulish, and others) and sentenced to several years of exile in Saratov. His “Hellas,” though referring to ancient times, has certain undertones relating to tsarist Russia, and bears a general message applying to his day and age. To a certain extent it likewise reveals the essence of his historical thought.

SORROW O grove, my wooded grove, so fresh and green! O wind, my streaming wind, so swift and keen! In the thick woods the leaves are growing yellow; The wind sways not the boughs and does not bellow. That which was once resplendent in the spring And made my heart in jocund gladness sing Has now grown cold and silent, lean and null – Gone is that season’s rapture, once so full. There, in a bush, a dove was cooing low; Jests in my thought were flitting to and fro. But the dove’s gentle voice no more is heard – My boyish thoughts have vanished like that bird. The moon is full, the stream with light inlaid, And you are fair as ever, dearest maid, – But summer’s hopes in autumn I abhor, And earthly beauty moves my heart no more.

STARS I climb the barrow in the night, The graves are dark and great; I raise my eyes and see the stars Stand bright in heaven’s estate. In measured movement, filled with life And an eternal grace, They flow unceasing in the height, Unnumbered in their place. An ordered choir, the stars march on Down skyways infinite; But we, the children of the dust, Exult not at the sight! For servitude, our destiny, Has ushered us to birth, Teased us with freedom for a time But tethered us to earth. The stars shine now; they shone of old; And they will shine for aye; But we, when we have gazed our fill, Will moulder in the clay.

Loudly the world has resounded the praise of thy marvellous glory, Even the schoolboy from childhood grows used to give laud to thy heroes Over thy ruins the tears of the nations are shed in lamenting, Kneeling in silence, the world gazed in throes of bewitched adoration. Vain was thy glory, however, thrice lovely, thrice beautiful country! Vainly thy Parthenon rose, and in vain were thy theatres crowded. Vain were the statutes of Solon and vain were Demosthenes’ speeches, Even in vain was Timoleon’s spirit, so lofty in action! Nay, thou didst tame not thy children, who tore at each other like tigers; Freedom was ever thy aim, while remaining a slave to old Mammon! Glory thou gavest to war between brothers; in Sparta accursed, Pan, for his pleasure, set ravening dog-packs to rend the sad helots! Thou has taught people to flee from their freedom and fall into slavedom; Thou has corrupted the greatest of gifts that the East had bequeathed thee; Dreams of thy posthumous glory have dazzled us all with illusion; Gazing bemused on thy face, we were blind to ourselves and our natures.