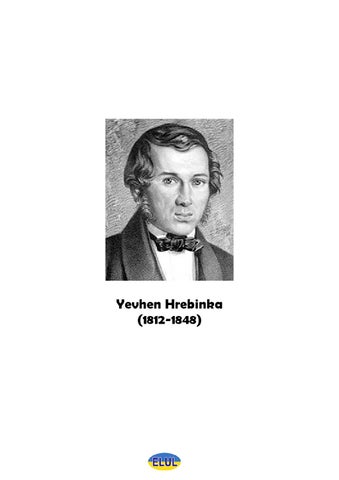 Yevhen Hrebinka (1812-1848) Hrebinka was a native of the Poltava region. His chief fame rests on his twenty-seven fables (also called Adages) which he wrote before he moved to St. Petersburg. There, imitating Mikola Hohol (Gogol), he tried his fortune in Russian literature by writing, in Russian, a number of novels and short stories on Ukrainian themes. For these he now hardly merits a footnote. The few lyrics he wrote are permeated with melancholy, but his fables, masterfully styled and versified, are full of cheerfulness and sparkling humour. Although their subject matter is mostly borrowed, the local colour with which they are infused renders them quite original. Their worth is further increased by the purity and suppleness of the language employed, the vividness in the descriptions of the Ukrainian landscape, and the psychological insight into the types portrayed. In that respect Hrebinka by far outpaced HulakArtemovsky. More than merely didactic, his fables mirrored the Ukrainian social conditions of the day and strongly intimated that a reform was long overdue. Although Hrebinka wrote predominantly in Russian, he was occasionally drawn to the Ukrainian speech, and in 1841, in collaboration with several of his compatriots, he published a collection of various literary items in this language under the title Lastivka (The Swallow). Perhaps aware that he was but a vagrant in both literatures, in his poem “My Bark” he expressed a keen sense of having lost his moorings.

MY BARK The blue sea is starting to stagger and roar, The boisterous winds are a-toss on its foam; The billows are rising in mountains before That, one on another, incessantly roam; Like darkening midnights, the thunderclouds glower And rumble out trumpets of judgement and power Unceasing from heaven’s high dome. The blue sea continues to seethe and to bellow; Some soul has let loose a small bark on that sea; And drifts ever father away to the lea. Not even an oar keeps the poor thing from tossing. My heart feels a pang for the bark in that crossing – Ah, why towards the storm must it flee? The sea has subsided, the billows have settled; The sea nymphs are gambolling glad in the spray;

3 Again on the deep move the vessels high-mettled, A hundred white sails show in gallant array. But what of my bark? Is my darling afloat? Alas, in the distance my glances can note Its whitening wreckage astray. As the sea to the bark is the world to my spirit: Since childhood it frights me with perils unknown. But where to escape? I am forced to come near it, Nor live out my life in a desert alone. Farewell, O my peace, I embark on a sea, It may be, of fate and misfortune for me, Wherever my bark may be blown.

ON TOP OF THE BELFRY The stairs up a belfry my uncle once scales And cries in contempt: “What a comical sight! The folk down below are no bigger than quails, No taller indeed that a nit or a mite! Ha, ha! From this vantage-point, lofty and far, I know them at last for the things that they are!” While a man on the ground marked his figure with glee, And asked of me: “What can that thing up there be? It looks like a rat or a sparrow to me.”

THE SUN AND THE CLOUD The sun has risen, shines and warms us all; The whole world blossoms like a poppy flower; Far in the blue a cloudbank flaunts its pall And hums a sulky song of peevish power: “Not in the least does that old sun delight me! Why does it keep on gladdening the earth? If I should frown, it smiles as if to spite me. I will fly boldly up and down its mirth!” Lo, half the sky the clouds with darkness fill And cover up the sun as with a night . . . But now the peerless sun mounts higher still And gilds the cloudbanks with immortal light.

THE SWAN AND THE GEESE Upon a pond, a swan was floating proudly; Grey geese beside him swam and gabbled loudly. “Has this white bird turned all your heads, forsooth?” One goose cried out, in sibilance uncouth. “Why do you stare at him with bulging sight When we are grey and he alone is white? If with one mind we act, in filthy fuss,

4 We can smear up this dude to look like us.” To this appeal the goose-flock all respond; There rose a mighty hubbub in the pond; Up from the depths they drag the slime and clay And smear the swan to make its feathers grey. The deed was done; the gabbling tongues grew slow; Then the swan dived – and rose as white as snow.

URSINE JUSTICE This charge was laid in lawcourt by the Fox: With his own eyes he’d seen the old grey Ox, In a lord’s farmyard, in a thievish fault, Gulp vineyard mash and hay and oats and salt. The Bear was judge; Wolves took the jurors’ place; And in their own sweet style they tried the case. Almost a day and night the courtroom sat: “How could one do a deed as bad as that! It had been natural, I must repeat, If this delinquent Ox had eaten meat,” The Bear-Judge thundered in a mighty growl, But he ate hay!” The Wolves began to howl. When the Ox sought to speak in his defence, The angry court forbade him to commence. He was well fed. And hence the sentence ran, Recorded by the court for all to scan: “Whereas the old grey Ox has here confessed To eating hay, salt, oats and all the rest, He shall be quartered and his flesh in fury Allotted to the hungry judge and jury; As for the horny hooves on which he walks, Let these he given to the plaintiff Fox.”

THE WOLF AND THE FIRE Deep in the forest someone made a fire. This happened in the fall, when days expire; Stark cold it was; winds raved through thickets brown; The paths were icy, and the snow came down; Some man had made it then, its comfort earning, And when he moved along had left it burning. Then somehow – I’m not certain, I’ll be bound – An old grey wolf the friendly fire found. Chilled to the bone, all famished and bespattered, Like a wet greyhound – how his poor teeth chattered! – He to the fire now ran, with thought to explore it, Glanced timidly around and sat before it (In all his life, the like he had not seen): He sits and feels with joy its fervour keen. Like summer suns it warms his hairy skin,

5 He thaws and gladly steams from tail to chin. The icicles that clinked upon his hide Had long since fallen off on every side. His muzzle to the fire he’d bring more nigh, Or gingerly put out his paw to dry, Or shake his shaggy tail beside the flame. Its terrors to his mind had now grown tame. For the beast thinks: “Why should I fearful be? The thing is like a bosom friend to me.” But the night fled; dawn brightened in the skies; It seemed as if the sun once more would rise. “It’s time to go,” the wolf thought with a sigh, “But first I ought to kiss this friend goodbye!” So to the raging flame he put his snout And burned it to the bone, beyond a doubt. Such was my father’s counsel: “Live with lords, If God this favour to your soul affords, And let their food and drink delight you much – But God preserve you from a closer touch!”

Monument to Yevhen Hrebinka in the town of Hrebinka, Poltava Region