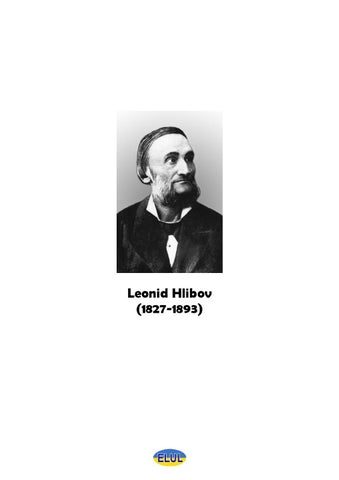 Leonid Hlibov (1827-1893) His father was a steward on the estate of a wealthy Ukrainian landlord in the region of Poltava. There Leonid Hlibov was born and received his elementary education from mother and the local parish priest. This he supplemented by extensive reading in his master’s excellent library. Later he attended the Gymnasium of Poltava, obtained a licentiate, and embarked on a teaching career at the Gymnasium of Chernihiv, where he gave instruction in history and geography. That post he lost on account of his Ukrainian nationalistic tendencies expressed in the weekly Chernihivskiy Listok (The Chernihiv Sheet) which he established in 1861 and edited till its suppression by Russian censorship two years later. He lived a life of penury until 1867, when he was appointed manager of the State Printing Press in Chernihiv, a position he retained for rest of his life. Hlibov entered the literary arena at the age of fifteen and remained productive all his life. Primarily he is the greatest Ukrainian fabulist. Like other European writers cultivating this genre, he derived his subjects from ancient sources, but invested them with his native atmosphere and local colour. In addition to being wrought in excellent artistic form, his fables, in their didacticism, bear a moralistic, humanitarian message applied to the social conditions of his times. Human nature, generally speaking, being immutable, much of that message retains a permanent value. In another aspect of his poetic endeavour, Hlibov is a fine lyricist, imbuing his verses with tender melancholy that stemmed from his unhappy life (illness, death of his young wife, persecution). Time and again, however, this depressive vein is relieved by genuine flashes of humour, such as are so abundantly evident in his fables. Hlibov also wrote poetry for children, and is considered as the chief pioneer of juvenile literature in Slavic Europe.

THE WOLF AND THE CAT Into a village ran a Wolf, hard pressed . . . Don’t think, dear friends, he came there as a guest! No wolf could hope to gain a host’s kind grace; He rushed, in fact, to find a hiding-place: Curs’d men and hounds pursued him with their hate; And though he longed to leap through any gate, He had no luck! For everywhere he turned, The harried Wolf no hiding-place discerned – It was enough to make one sit and weep! For all the gates around were dosed and steep, And yet the Wolf was very loath to die (Because, you see, he still felt hale and spry!)

3 And, to dodge death, dared face man’s habitat. Then suddenly he spies a dozing Cat, Who on a fence sat purring in the sun. Swiftly he hails the puss, his fate to shun: “Kitty, my friend, pray tell me quickly, dear, Who is the kindest of the masters here? I’d like to ask him, in this moment fell, To hide me safely. I’d repay him well! . . . Hark to that hue and cry! They’re on my trail! Puss, my dear friend, what shelter could avail?” “Run and ask Stephen for a saving plan,” The Cat made answer. “He’s a kindly man.” – “Not so, for I have stolen Stephen’s sheep.” – “Well then, seek Demian, if you would not weep.” – “Demian I also fear, for, by my soul, He will recall the sucking pig I stole.” – “Then hurry to the place where Trofim lives!” – “Alas, I doubt if Trofim yet forgives My fault in picking up a lamb last spring !” – “That’s bad! . . . But would Klim grant you sheltering? “Ah, friend! I once deprived him of a calf!” “It seems that all are vexed on your behalf,” The Cat said to the Wolf. “It’s mighty queer Why in the first place you have ventured here. Our lusty lads have not so lost their wits As to keep safe a Wolf whom none acquits. The fault, dear chap, is utterly your own: Now you must reap whatever you have sown!”

THE RUSTLING LEAVES Down in a vale beneath a hill A tall, green maple stood in pride; Upon a bank, by waters still, It spread its leafy branches wide. Its gay leaves whispered to the breeze: “Come, our dear friend, breathe yet again! Mark for yourself our melodies! We are the Rustlers on the glen. “And if we did not rustle so, Who would transport this vale with joy? Whom would you play with as you flow? Whom would your happy breath employ? “What would remain if we were gone? What beauty? Naught but weeds and sedge. It were a wilderness anon, But now behold its privilege!

4 The cuckoo’s songs our voice salute, He pays his call with vocal glee; A boyish shepherd plays his flute Beneath our shady maple tree. “The nightingale’s soft notes entrance. And in the night when all is still The dryads ply their merry dance And lead in moonlight their quadrille.” – “You would not rustle, but for us,” The roots spoke low beneath the ground; “If we did not sustain you thus, You would not make that pleasant sound.” “Why should you roots have aught to say?” The leaves replied in rustling riot; “Your boasts your muddy thoughts betray. You would do better to lie quiet!” “Hush, you delight in foolishness!” The roots made answer to this chaff; “You and the boasting you profess Must make a man of reason laugh. “Like ignorant babes you babble rot, And sin in grudging us our due! Though life in loam has been our lot, Yet we have always cared for you. “This lordly maple could not stand (May words of praise be given place!), Were we not rooted in the land To hold aloft its strength and grace. “Warm summer passes, as God wills, And we shall fall asleep till spring; But yellowed by the autumn’s chills, You’ll die, for all your fluttering. “Then other leaves will deck the trees And other blossoms shall befall; But cuckoo, nightingale and breeze Will not remember you at all.” Light human boasters, too, prevail, Like the tall maple’s rustling friskers; Let such men hearken to my tale And twirl its moral on their whiskers.

THE ROOSTER AND THE PEARL Along a hedgerow, near a peasant&#39;s hut, A rooster idly scratched a refuse-pile, And pecked and chattered with a boastful strut, Expecting little, in his wonted style. There in the rubbish suddenly he found A lovely, shining, iridescent pearl; And took the precious jewel from the ground And underneath the hedge his gem did hurl. “I do not care for such a petty thing,” Said he, “Such gewgaws are not good to eat! For handfuls of such worthless glittering I would not give a single grain of wheat. “Let the dull turkey swallow them forsooth.” Thus does a stupid simpleton indict Life&#39;s treasures when he cannot know the truth And obstinately thinks that he is right.

7 SORROW Yonder a lofty hillock stands, A grove below it lies, So leafy and so green a nook It seems a paradise. Along the grove a streamlet winds; Like glass its waves have shone; And down the verdant valley there It rushes on and on. In a calm spot beside the bank A few small boats are moored, While three green willows there bend low As if to grief inured. Pity that summer soon will pass, That chilling winds will blow, And foliage fall and on the waves Be carried as they flow. I, too, am grieving on the bank . . . The rushing streamlet grieves While my poor miserable heart Pines with the sorrowing leaves. O rushing rill! O precious brook! The summer of my day Once sparkled like your gleaming waves But now must pass away . . . But while to you, my charming stream, The months will Spring restore, My youth can never come again, No never, never more! Yonder the lofty hillock stands, The green grove lisps in play, The birds are singing forth their joy, The rivulet is gay. What sheer delight it is to live In such a radiant world! And why then is my aching heart To deep dejection hurled? It aches and sorrows at the thought That months will Spring restore, But youth can never come again, No never, never more! Translated by C.H.Andrushysen and Watson Kirkonnell The Ukrainian Poets, 1189-1962. University of Toronto Press 1963