Innovation Winter 2016: The Story Behind the Design 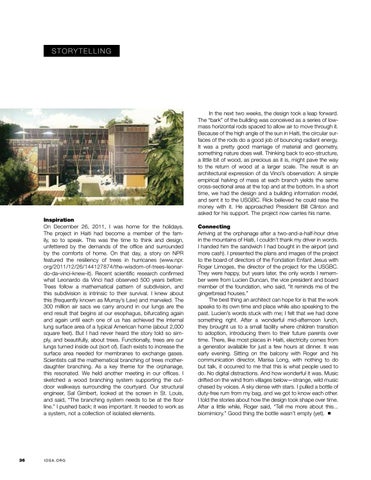 In the next two weeks, the design took a leap forward. The “bark” of the building was conceived as a series of lowmass horizontal rods spaced to allow air to move through it. Because of the high angle of the sun in Haiti, the circular surfaces of the rods do a good job of bouncing radiant energy. It was a pretty good marriage of material and geometry, something nature does well. Thinking back to eco-structure, a little bit of wood, as precious as it is, might pave the way to the return of wood at a larger scale. The result is an architectural expression of da Vinci’s observation: A simple empirical halving of mass at each branch yields the same cross-sectional area at the top and at the bottom. In a short time, we had the design and a building information model, and sent it to the USGBC. Rick believed he could raise the money with it. He approached President Bill Clinton and asked for his support. The project now carries his name. Inspiration On December 26, 2011, I was home for the holidays. The project in Haiti had become a member of the family, so to speak. This was the time to think and design, unfettered by the demands of the office and surrounded by the comforts of home. On that day, a story on NPR featured the resiliency of trees in hurricanes (www.npr. org/2011/12/26/144127874/the-wisdom-of-trees-leonardo-da-vinci-knew-it). Recent scientific research confirmed what Leonardo da Vinci had observed 500 years before: Trees follow a mathematical pattern of subdivision, and this subdivision is intrinsic to their survival. I knew about this (frequently known as Murray’s Law) and marveled. The 300 million air sacs we carry around in our lungs are the end result that begins at our esophagus, bifurcating again and again until each one of us has achieved the internal lung surface area of a typical American home (about 2,000 square feet). But I had never heard the story told so simply, and beautifully, about trees. Functionally, trees are our lungs turned inside out (sort of). Each exists to increase the surface area needed for membranes to exchange gases. Scientists call the mathematical branching of trees motherdaughter branching. As a key theme for the orphanage, this resonated. We held another meeting in our offices. I sketched a wood branching system supporting the outdoor walkways surrounding the courtyard. Our structural engineer, Sal Gimbert, looked at the screen in St. Louis, and said, “The branching system needs to be at the floor line.” I pushed back; it was important. It needed to work as a system, not a collection of isolated elements.

Connecting Arriving at the orphanage after a two-and-a-half-hour drive in the mountains of Haiti, I couldn’t thank my driver in words. I handed him the sandwich I had bought in the airport (and more cash). I presented the plans and images of the project to the board of directors of the Fondation Enfant Jesus with Roger Limoges, the director of the project for the USGBC. They were happy, but years later, the only words I remember were from Lucien Duncan, the vice president and board member of the foundation, who said, “It reminds me of the gingerbread houses.” The best thing an architect can hope for is that the work speaks to its own time and place while also speaking to the past. Lucien’s words stuck with me; I felt that we had done something right. After a wonderful mid-afternoon lunch, they brought us to a small facility where children transition to adoption, introducing them to their future parents over time. There, like most places in Haiti, electricity comes from a generator available for just a few hours at dinner. It was early evening. Sitting on the balcony with Roger and his communication director, Marisa Long, with nothing to do but talk, it occurred to me that this is what people used to do. No digital distractions. And how wonderful it was. Music drifted on the wind from villages below—strange, wild music chased by voices. A sky dense with stars. I pulled a bottle of duty-free rum from my bag, and we got to know each other. I told the stories about how the design took shape over time. After a little while, Roger said, “Tell me more about this... biomimicry.” Good thing the bottle wasn’t empty (yet). n

Innovation Winter 2016: The Story Behind the Design 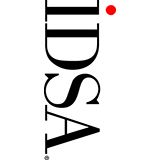