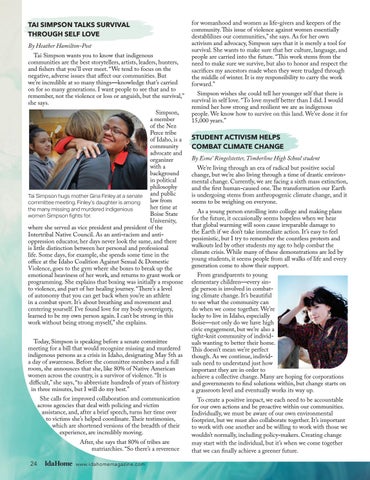 TAI SIMPSON TALKS SURVIVAL THROUGH SELF LOVE By Heather Hamilton-Post

Tai Simpson wants you to know that indigenous communities are the best storytellers, artists, leaders, hunters, and fishers that you’ll ever meet. “We tend to focus on the negative, adverse issues that affect our communities. But we’re incredible at so many things—knowledge that’s carried on for so many generations. I want people to see that and to remember, not the violence or loss or anguish, but the survival,” she says. Simpson, a member of the Nez Perce tribe of Idaho, is a community advocate and organizer with a background in political philosophy Tai Simpson hugs mother Gina Finley at a senate and public law from committee meeting. Finley’s daughter is among her time at the many missing and murdered indigenious Boise State women Simpson fights for. University, where she served as vice president and president of the Intertribal Native Council. As an anti-racism and antioppression educator, her days never look the same, and there is little distinction between her personal and professional life. Some days, for example, she spends some time in the office at the Idaho Coalition Against Sexual &amp; Domestic Violence, goes to the gym where she boxes to break up the emotional heaviness of her work, and returns to grant work or programming. She explains that boxing was initially a response to violence, and part of her healing journey. “There’s a level of autonomy that you can get back when you’re an athlete in a combat sport. It’s about breathing and movement and centering yourself. I’ve found love for my body sovereignty, learned to be my own person again. I can’t be strong in this work without being strong myself,” she explains. Today, Simpson is speaking before a senate committee meeting for a bill that would recognize missing and murdered indigenous persons as a crisis in Idaho, designating May 5th as a day of awareness. Before the committee members and a full room, she announces that she, like 80% of Native American women across the country, is a survivor of violence. “It is difficult,” she says, “to abbreviate hundreds of years of history in three minutes, but I will do my best.” She calls for improved collaboration and communication across agencies that deal with policing and victim assistance, and, after a brief speech, turns her time over to victims she’s helped coordinate. Their testimonies, which are shortened versions of the breadth of their experience, are incredibly moving. After, she says that 80% of tribes are matriarchies. “So there’s a reverence

for womanhood and women as life-givers and keepers of the community. This issue of violence against women essentially destablilizes our communities,” she says. As for her own activism and advocacy, Simpson says that it is merely a tool for survival. She wants to make sure that her culture, language, and people are carried into the future. “This work stems from the need to make sure we survive, but also to honor and respect the sacrifices my ancestors made when they were trudged through the middle of winter. It is my responsibility to carry the work forward.”

Simpson wishes she could tell her younger self that there is survival in self love. “To love myself better than I did. I would remind her how strong and resilient we are as indigenous people. We know how to survive on this land. We’ve done it for 15,000 years.”

We’re living through an era of radical but positive social change, but we’re also living through a time of drastic environmental change. Currently, we are facing a sixth mass extinction, and the first human-caused one. The transformation our Earth is undergoing stems from anthropogenic climate change, and it seems to be weighing on everyone. As a young person enrolling into college and making plans for the future, it occasionally seems hopeless when we hear that global warming will soon cause irreparable damage to the Earth if we don’t take immediate action. It’s easy to feel pessimistic, but I try to remember the countless protests and walkouts led by other students my age to help combat the climate crisis. While many of these demonstrations are led by young students, it seems people from all walks of life and every generation come to show their support. From grandparents to young elementary children—every single person is involved in combating climate change. It’s beautiful to see what the community can do when we come together. We’re lucky to live in Idaho, especially Boise—not only do we have high civic engagement, but we’re also a tight-knit community of individuals wanting to better their home. This doesn’t mean we’re perfect though. As we continue, individuals need to understand just how important they are in order to achieve a collective change. Many are hoping for corporations and governments to find solutions within, but change starts on a grassroots level and eventually works its way up.

To create a positive impact, we each need to be accountable for our own actions and be proactive within our communities. Individually, we must be aware of our own environmental footprint, but we must also collaborate together. It’s important to work with one another and be willing to work with those we wouldn’t normally, including policy-makers. Creating change may start with the individual, but it’s when we come together that we can finally achieve a greener future. 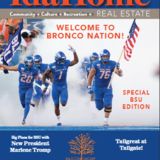