A Digital Future for Alberta: An Analysis of Digital Occupations in Alberta’s High-Growth Sectors 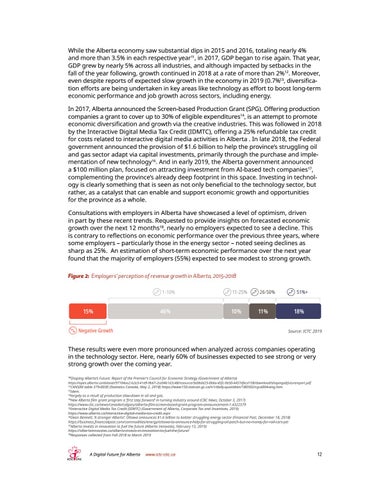 While the Alberta economy saw substantial dips in 2015 and 2016, totaling nearly 4% and more than 3.5% in each respective year11, in 2017, GDP began to rise again. That year, GDP grew by nearly 5% across all industries, and although impacted by setbacks in the fall of the year following, growth continued in 2018 at a rate of more than 2%12. Moreover, even despite reports of expected slow growth in the economy in 2019 (0.7%13, diversification efforts are being undertaken in key areas like technology as effort to boost long-term economic performance and job growth across sectors, including energy. In 2017, Alberta announced the Screen-based Production Grant (SPG). Offering production companies a grant to cover up to 30% of eligible expenditures14, is an attempt to promote economic diversification and growth via the creative industries. This was followed in 2018 by the Interactive Digital Media Tax Credit (IDMTC), offering a 25% refundable tax credit for costs related to interactive digital media activities in Alberta . In late 2018, the Federal government announced the provision of $1.6 billion to help the province’s struggling oil and gas sector adapt via capital investments, primarily through the purchase and implementation of new technology16. And in early 2019, the Alberta government announced a $100 million plan, focused on attracting investment from AI-based tech companies17, complementing the province’s already deep footprint in this space. Investing in technology is clearly something that is seen as not only beneficial to the technology sector, but rather, as a catalyst that can enable and support economic growth and opportunities for the province as a whole. Consultations with employers in Alberta have showcased a level of optimism, driven in part by these recent trends. Requested to provide insights on forecasted economic growth over the next 12 months18, nearly no employers expected to see a decline. This is contrary to reflections on economic performance over the previous three years, where some employers – particularly those in the energy sector – noted seeing declines as sharp as 25%. An estimation of short-term economic performance over the next year found that the majority of employers (55%) expected to see modest to strong growth. Figure 2: Employers’ perception of revenue growth in Alberta, 2015-2018 1-10%

These results were even more pronounced when analyzed across companies operating in the technology sector. Here, nearly 60% of businesses expected to see strong or very strong growth over the coming year. Shaping Alberta’s Future: Report of the Premier’s Council for Economic Strategy (Government of Alberta)

A Digital Future for Alberta

A Digital Future for Alberta: An Analysis of Digital Occupations in Alberta’s High-Growth Sectors

Over the last few years, Alberta has begun to actively seek methods of diversifying its economy while strengthening the competitive advantage of the oil & gas industry. Recent investments in upstream oil & gas digital transformation, as well as clean energy, biotech, robotics, and artificial intelligence (AI), have served to shine a light on the province, making it an increasingly popular destination for skilled talent. At the same time, many emerging digital-based sectors like interactive media, connected healthcare, aerospace and others are well poised for growth in Alberta. The uptake in employment among core digital occupations like software developers, data scientists, and cybersecurity analysts is now nearly triple that of the employment prospects for the overall economy – a trend that is expected to continue in the coming years. 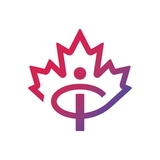