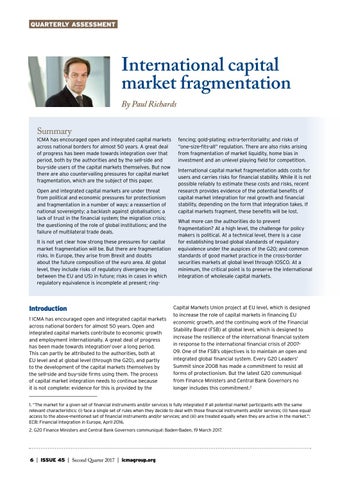 ICMA has encouraged open and integrated capital markets across national borders for almost 50 years. A great deal of progress has been made towards integration over that period, both by the authorities and by the sell-side and buy-side users of the capital markets themselves. But now there are also countervailing pressures for capital market fragmentation, which are the subject of this paper. Open and integrated capital markets are under threat from political and economic pressures for protectionism and fragmentation in a number of ways: a reassertion of national sovereignty; a backlash against globalisation; a lack of trust in the financial system; the migration crisis; the questioning of the role of global institutions; and the failure of multilateral trade deals. It is not yet clear how strong these pressures for capital market fragmentation will be. But there are fragmentation risks. In Europe, they arise from Brexit and doubts about the future composition of the euro area. At global level, they include risks of regulatory divergence (eg between the EU and US) in future; risks in cases in which regulatory equivalence is incomplete at present; ring-

Introduction 1 ICMA has encouraged open and integrated capital markets across national borders for almost 50 years. Open and integrated capital markets contribute to economic growth and employment internationally. A great deal of progress has been made towards integration1 over a long period. This can partly be attributed to the authorities, both at EU level and at global level (through the G20), and partly to the development of the capital markets themselves by the sell-side and buy-side firms using them. The process of capital market integration needs to continue because it is not complete: evidence for this is provided by the

fencing; gold-plating; extra-territoriality; and risks of “one-size-fits-all” regulation. There are also risks arising from fragmentation of market liquidity, home bias in investment and an unlevel playing field for competition. International capital market fragmentation adds costs for users and carries risks for financial stability. While it is not possible reliably to estimate these costs and risks, recent research provides evidence of the potential benefits of capital market integration for real growth and financial stability, depending on the form that integration takes. If capital markets fragment, these benefits will be lost. What more can the authorities do to prevent fragmentation? At a high level, the challenge for policy makers is political. At a technical level, there is a case for establishing broad global standards of regulatory equivalence under the auspices of the G20; and common standards of good market practice in the cross-border securities markets at global level through IOSCO. At a minimum, the critical point is to preserve the international integration of wholesale capital markets.

Capital Markets Union project at EU level, which is designed to increase the role of capital markets in financing EU economic growth, and the continuing work of the Financial Stability Board (FSB) at global level, which is designed to increase the resilience of the international financial system in response to the international financial crisis of 200709. One of the FSB’s objectives is to maintain an open and integrated global financial system. Every G20 Leaders’ Summit since 2008 has made a commitment to resist all forms of protectionism. But the latest G20 communiqué from Finance Ministers and Central Bank Governors no longer includes this commitment.2

This Quarterly Report is produced by the Market Practice and Regulatory Policy team at ICMA. It outlines developments in the main areas in which the Association is currently engaged namely: primary markets, secondary markets, repo and collateral markets, asset management and capital market products. 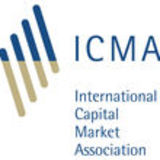