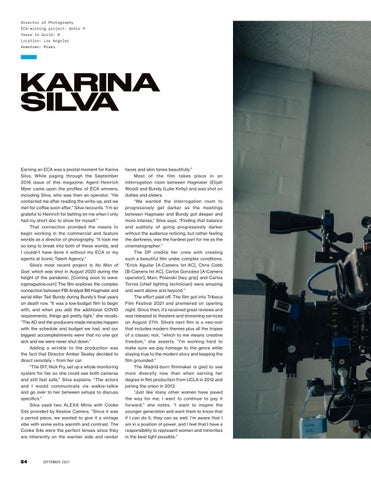 KARINA SILVA Earning an ECA was a pivotal moment for Karina Silva. While paging through the September 2016 issue of this magazine, Agent Heinrich Myer came upon the profiles of ECA winners, including Silva, who was then an operator. “He contacted me after reading the write-up, and we met for coffee soon after,” Silva recounts. “I’m so grateful to Heinrich for betting on me when I only had my short doc to show for myself.” That connection provided the means to begin working in the commercial and feature worlds as a director of photography. “It took me so long to break into both of these worlds, and I couldn’t have done it without my ECA or my agents at Iconic Talent Agency.” Silva’s most recent project is No Man of God, which was shot in August 2020 during the height of the pandemic. [Coming soon to www. icgmagazine.com] The film explores the complex connection between FBI Analyst Bill Hagmaier and serial killer Ted Bundy during Bundy’s final years on death row. “It was a low-budget film to begin with, and when you add the additional COVID requirements, things got pretty tight,” she recalls. “The AD and the producers made miracles happen with the schedule and budget we had, and our biggest accomplishments were that no one got sick and we were never shut down.” Adding a wrinkle to the production was the fact that Director Amber Sealey decided to direct remotely – from her car. “The DIT, Nick Fry, set up a whole monitoring system for her so she could see both cameras and still feel safe,” Silva explains. “The actors and I would communicate via walkie-talkie and go over to her between setups to discuss specifics.” Silva used two ALEXA Minis with Cooke S4s provided by Keslow Camera. “Since it was a period piece, we wanted to give it a vintage vibe with some extra warmth and contrast. The Cooke S4s were the perfect lenses since they are inherently on the warmer side and render

faces and skin tones beautifully.” Most of the film takes place in an interrogation room between Hagmaier (Elijah Wood) and Bundy (Luke Kirby) and was shot on dollies and sliders. “We wanted the interrogation room to progressively get darker as the meetings between Hagmaier and Bundy got deeper and more intense,” Silva says. “Finding that balance and subtlety of going progressively darker without the audience noticing, but rather feeling the darkness, was the hardest part for me as the cinematographer.” The DP credits her crew with creating such a beautiful film under complex conditions. “Erick Aguilar [A-Camera 1st AC], Chris Cobb [B-Camera 1st AC], Carlos González [A-Camera operator], Marc Polanski [key grip] and Carlos Torres [chief lighting technician] were amazing and went above and beyond.” The effort paid off. The film got into Tribeca Film Festival 2021 and premiered on opening night. Since then, it’s received great reviews and was released to theaters and streaming services on August 27th. Silva’s next film is a neo-noir that includes modern themes plus all the tropes of a classic noir, “which to me means creative freedom,” she asserts. “I’m working hard to make sure we pay homage to the genre while staying true to the modern story and keeping the film grounded.” The Madrid-born filmmaker is glad to see more diversity now than when earning her degree in film production from UCLA in 2012 and joining the union in 2013. “Just like many other women have paved the way for me, I want to continue to pay it forward,” she notes. “I want to inspire the younger generation and want them to know that if I can do it, they can as well. I’m aware that I am in a position of power, and I feel that I have a responsibility to represent women and minorities in the best light possible.”

Featuring Fantasy Island, Candyman, and Reminiscence. ICG Magazine has been the world’s premier cinematography publication since 1929. Published 10x a year by the International Cinematographers Guild, its core mission is to showcase the work of Guild members, IATSE Local 600. The technical and creative expertise of the more than 9,000 Directors of Photography, Camera Operators and Assistants, Loaders, Visual Effects Supervisors, Unit Still Photographers and Publicists that make up Local 600 is unmatched, having garnered Oscars, Emmys, and numerous other prestigious industry awards. 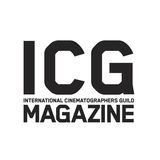